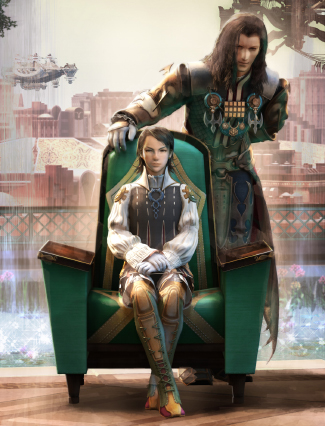 The Princely Young Man is the Spear Counterpart to the Ojou, being a young male of elite status, either by wealth, social position, or sheer force of personality and popularity.

Like the Ojou, he is rarely a Blue Blood, but he is either treated like royalty by those around him, or acts as a prince might, either stuck up and demanding respect, or regal and aloof towards his "subjects". Usually he is rich and his parents have a very high place in society, possibly in the form of a government job or ownership of an important company or corporation, which he might be expected to inherit. He is granted a great deal of respect by the "commoners" around him due to this, who look up to him and defer to his wishes. It is extremely common for an Instant Fanclub to spring up in his wake, often in the form of admiring fangirls with hopes of being his girlfriend. This popularity often allows him to have a high position in the Absurdly Powerful Student Council. He often has an Army of Lawyers or Corporate Samurai at his beck and call, enforcing his authority or acting as protection. He probably also has a Battle Butler, Ninja Maid or Old Retainer who follows him around, doing his bidding. The Princely Young Man very often acts as the Love Interest of a female protagonist (particularly in Shōjo works). Reverse Harems often have many of them in varying types, or as a villain, heading the Student Council against the protagonist.

There are a few common types, though how strictly a character adheres to the types varies. These types include a Prince Charming type, an Ice King type, a Gentleman Type, and a Spoiled Brat type. To read about how these types tend to play out, read the Analysis for this page.

Kikōshi is the Japanese term often used for this. Often it is translated to "Young Master", which these characters might be addressed by, especially by their servants, should they have them.