The Rich Have White Stuff 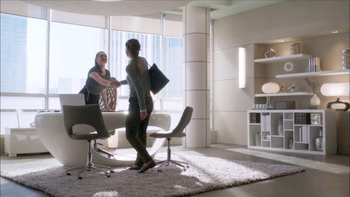 This trope goes back millennia, to the times when only rich people could afford 'clean' white bread, something which was still happening only last century, and the lower classes had to suffice with the bog standard 'dirty' brown bread.

Throughout history, the 'richer' people were more likely to wear white clothes as they could have them cleaned more frequently, had more of them to wear, and did not partake in tasks which were more likely to dirty them, the 'poorer' wearing predominantly darker clothing as these items do not show stains as much and retain heat.

More modernly, sleek and white homes (especially kitchens) and workplace lobbies or laboratories are very expensive to keep aseptically or professionally clean and also, because of the jobs they are required for, associated with financial and career success. Stereotypically it is also shown that rich and 'preppy' children are outfitted in tennis or cricket whites and polo shirts, even when not in the vicinity of the sport, so potentially parents are showcasing their wealth through their children and how pristine they can keep easily-grass stained clothes.

In reality, this is almost a Forgotten Trope, with white objects commonplace so no longer solely a form of Conspicuous Consumption, but they were so in the past. (If anything, it can often be a sign that the owner is a cheapskate or a new arrival to their home, and hasn't bothered to paint anything yet.) Fiction doesn't seem to have caught up yet, or - as per the nature of tropes - still finds it convenient to use white stuff as a signifier of wealth.

This trope does not apply to things that are expensive no matter the color, such as jewelry, furs, or luxury cars.

This often overlaps with Simple, yet Opulent, in that many things aren't blinged up or pimped out, but being white still makes them opulent.

A Sister Trope to Gold Makes Everything Shiny.

See also Ascetic Aesthetic, The Aesthetics of Technology, Crystal Spires and Togas, Everything Is an iPod in the Future.

Has nothing to do with The Cartel and the white stuff they have.