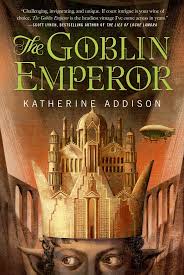 The castle is not actually on his head. We think.
Advertisement:

Maia, fourth son of the emperor of the Elflands, finds himself in a position he never expected when his father and all three of his older brothers die during a mysterious airship accident, leaving him next in line for the throne. Unfortunately for Maia, his half-goblin heritage meant he was The Unfavorite of his father, and he grew up largely in seclusion, exiled to a manor in the countryside. Thrust suddenly into the spotlight at the Untheileneise, he is woefully unprepared to deal with either the backstabbing that goes on or the actual administrative and diplomatic work required of him.

A sequel series, The Cemeteries Of Amalo, focusing on detective-priest Thara Celehar has been released and is currently consists of The Witness for the Dead (June 2021), with The Grief of Stones following in June 2022.