Locked Away in a Monastery 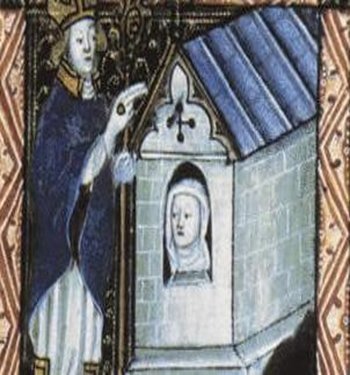 My cell is so narrow, you may say, but oh, how wide is the sky!
Father Ted Crilly: That would be quite common you know. The favourite son would become a doctor and then the idiot brother would be sent off to the priesthood.
Father Dougal Maguire: Your brother's a doctor, isn't he?
Father Ted: Yes, he is.
— Father Ted
Advertisement:

A trope often found in a Standard Royal Court: When someone in power (e.g. the monarch) wants a person (e.g. an heir, a spouse, or a favorite) removed from public sight but are unwilling to kill them (e.g. because of Royal Blood, or because they actually just want to protect them), they will make them take the vows at a remote monastery/nunnery. This way, the newly-made monk/nun will be permanently restricted in movement and any voluntary or assisted attempt to return to secular life will be considered a sacrilege. Also, celibacy means they won't have children.

In a less permanent variation, convents of nuns are also a popular choice for wealthy families to place their daughters in until they marry: they'll have a strict upbringing, education, and more or less guaranteed virginity. Bonus points for not needing to provide the kid with class-relevant and expensive dresses while she is kept there.note An example of a guest resident of a convent is Ximena in El Cid. Such women might be forced to Take the Veil, usually if they had a substantial inheritance coming and the family wanted to keep control of it.

As the Real Life section shows this was very much Truth in Television for European (and especially Greek/Eastern Roman) royalty during the Middle Ages, where deposed or abdicated rulers and other undesirable claimants were often permitted to retire to a monastery (willingly or less so) as an alternative to killing them.

Sub-Trope of The Exile, Reassigned to Antarctica, and Kicked Upstairs (in the sense that the failed courtier of earthly monarchs is now serving the Lord of Heaven). Related to Man in the Iron Mask. Not Get Thee to a Nunnery, where it appears that someone is threatening a woman with this but it is actually a Double Entendre.