Literature / Tales of the Ketty Jay 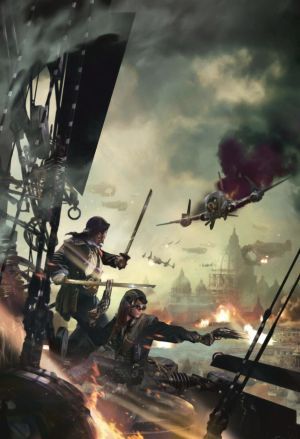 Since he'd almost crashed in the canyon, the question had been haunting him. "What would he leave behind?" Now he had an answer. A damn good story.
"The Black Lung Captain"

Picture, for a few seconds, a tale of scallywag sky pirates trying to survive beneath the notice of the law. A tale of steampunk airship pirates. And now that we have your attention...

Tales of the Ketty Jay is a series of four sci-fi fantasy books by Chris Wooding which focuses on an aircraft called the Ketty Jay, owned and piloted by Darian Frey, and her ragtag crew.

We follow the ship from the arrival of Jezibeth "Jez" Kyte, the new navigator. She discovers that everyone on this ship has a reason to leave the world behind. Meanwhile, the world keeps trying to drag the crew into the schemes of the great and powerful.

The series plays in a well-established toolbox and doesn't add much (apart from psychological depth), but is damn good fun. The series is now concluded, and consists of four books: Retribution Falls, The Black Lung Captain, The Iron Jackal, and The Ace of Skulls.