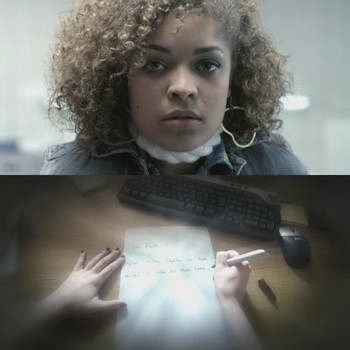 When a character is able to use a Psychic Link or similar to see what another character is seeing, particularly when at a distance. Basically, a form of clairvoyance using a host character as an on-site medium.
Advertisement:

Control may be with either the owner of the eyes/host, or the observer. Either way, this usually requires the cooperation of the host, although it is not essential. It is also frequently mentioned by the passive observer to be strange having their view change unexpectedly. Particularly if the observer is in control, the host may experience an Eye Colour Change.

This skill can be useful in a variety of situations but is particularly suited to spying. It means that only one character needs to be in the (presumably dangerous) situation, while the other character — who may have more knowledge but fit in less well — can watch from safety. It is also necessary (among other senses) for remotely operated People Puppets.

This skill can sometimes be used as replacement vision by a character who suffers from Temporary (or not so temporary) Blindness. Even they are not blind, a character may use it for a similar reason if the host has a different type of vision and can see other things the viewer normally can't, although this is normally more temporary.

In a more humorous application, when used short-range this can even serve double-duty as a mirror.

This can also occur during Dream Spying if the POV is that of a character at the location. One of the more common host/viewer pairings is with Mindlink Mates; in cases where the host is an animal (particularly non-sapient), this is Animal Eye Spy. It is often closely associated with Telepathy, particularly in cases where the observer asks permission first.

Clairvoyance is a psychic power that allows Raz to see through the eyes of other people.

Clairvoyance is a psychic power that allows Raz to see through the eyes of other people.