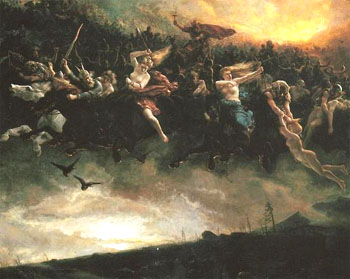 These dudes are gonna mess up your whole day. note Åsgårdsreien (The Ride of Asgard) by Peter Nicolai Arbo (1872).
And Meena heard the other thing one night — that awful, hopeless almost-human wail crossing the sky just ahead of the Hunt. [...] She said, very softly: "We have demons in India, demons with a hundred terrible heads — even demons that can be gods at the same time, it depends. We don't have that. We don't."
— Tamsin
Advertisement:

Thunder rolls. Or is that hoofbeats in the sky? Above the wailing wind, a hunting horn can be heard, and the baying of cruel hounds. The Wild Hunt roams the land and sky, and all honest men cower in their homes, for even the sight of it can bring disaster.

Originating in European stories recorded in The Middle Ages, as well as Hindu Puranas of the same time period, this trope is Older Than Print. The nature of the Wild Hunt varied somewhat from location to location. However, the overall nature of the Hunt was generally agreed upon — it was otherworldly, the participants were mounted on Hellish Horses and accompanied by Hellhounds. It usually existed to either hunt the living, punish the hunters, or both.

Sometimes the Hunt was hunting the dead or dying with the purpose of taking them to the afterlife, such as the Norse version which was led by Odin or the Welsh version led by Gwyn ap Nudd. A Greek version is said to have been led by Hecate or Artemis. The Maenads' orgies of ecstasy and bloodshed, led by Dionysus bear some similarities as well. Some medieval regions reported that the Hunt was led by Diana — though interestingly enough, not in any region where Diana had been worshipped historically.note  There is only one goddess mentioned in the New Testament, and it is Diana; folklorists consider it the most likely source. The other huntsmen were often the dead or hapless mortals swept up into the hunt for all eternity. This legend was later adapted by Christianity, with its versions of the Hunt being led by Satan, Herodias, Habundia (a fairy queen from Scottish folklore, possibly equivalent to Queen Medb in Irish folklore, and Queen Mab in English folklore), or sometimes a localized huntsman figure like the English Herne the Hunter, the French Hellequin, or the German Hans von Hackelbernd. With the other huntsmen or witches being the damned and the hounds themselves being the souls of unbaptized children.

Other times, the Hunt was made up of The Fair Folk. This version, also known as the Fairy Raed, tends to be led by a bare-chested man with an antlered deer skull for a head. In Norway, it was said that the hunt brought luck to the place where it rested. Certain farms had such legends connected to them.

Modern versions of the Wild Hunt tend to be as varied as the source, but they usually involve a spectral hunter mounted on an unearthly horse, usually accompanied by an equally unearthly host and hounds.

Also, the Wild Hunt may have been the origin of Santa Claus riding in the sky with his sledge and reindeer, and delivering presents on Christmas. Badass Santa's not without reason, apparently.

One theory is that the Wild Hunt legend derives from the sounds of large flocks of migrating geese, whose honkings can sound like dogs barking.

For a similar Japanese legend, see Night Parade of One Hundred Demons.