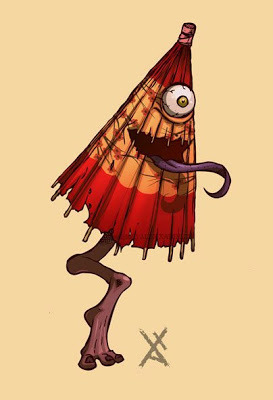 The karakasa, also known as karakasa-kozō or kasa-obake (which means "umbrella ghost"), is a Japanese fantastic creature with the body of an old oiled-paper Chinese umbrella. It is usually represented as an anthropomorphic being with one eye, an Overly Long Tongue sticking out of a mouth and one leg in place of the handle. Its leg ends either in a clawed foot or a human foot wearing a geta (wooden sandal). It might or might not have arms.

The karakasa belongs to the class of youkai known as tsukumogami, discarded household objects that suddenly spring to life when they become 100 years old. It shares several of its physical characteristics with other youkai, particularly hitotsume-kozō (which otherwise resembles a human child rather than an animate umbrella).

A rarer variant is the hone-karakasa, which is the spirit of an umbrella damaged by being ripped apart in high winds. Consequently, it has a somewhat fish-like appearance, using the splayed ribs/wings of its former body to fly and coming out during wet, windy weather, signifying truly awful weather is on its way.

Even though karakasa, unlike other youkai, are not based on Japanese folktales, their goofy appearance makes them highly popular to draw, and you can almost certainly count on one of them showing up in any work that centers on or features youkai, where they are typically portrayed as Silly Spooks. Japanese-flavored stages in video games often feature umbrella ghosts as minor enemies.