"You always gotta give a proper greeting!"

She is a yamabiko, a youkai responsible for creating echoes in the mountains. She's recently converted to Buddhism and joined the Myouren Temple, and enjoys reciting sutras.

Yoshika is a jiangshi, and a bodyguard of sorts for Seiga Kaku. She's not very good at her job. 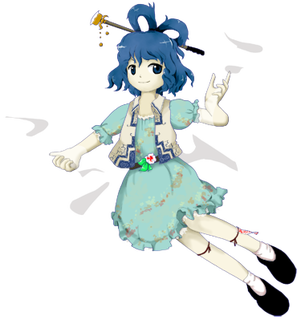 The Wicked Hermit Who Passes Through Walls
Seiga Kaku

"The folks in Hell consider you evil just for living a long life. How rude."

A Chinese hermit and the creator of Yoshika. She is the one that taught Miko Taoism, and the one to suggest using Buddhism to pacify Japan. She assists with Miko's resurrection in Gensokyo, although doesn't actually ally herself with the Miko faction, instead choosing to pursue a variety of people she finds interesting. 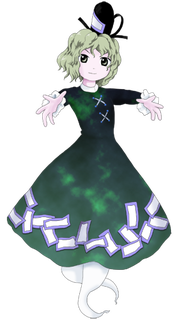 Ghost of the Children of the Gods
Soga no Tojiko

One of Miko's followers, she manipulated the events of the religious war as a member of the Buddhist faction. Exists as a ghost due to Futo sabotaging her attempt to become a taoist immortal. In game, she's another midboss with no dialogue - though she speaks in one of Miko's spell cards. 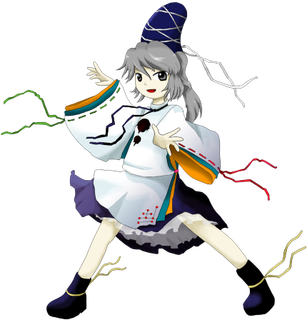 A Shikaisen from Ancient Japan
Mononobe no Futo

"Though apart from creed, Buddhism and I have a profound connection. It moveth me most deeply... shall I start a fire?"

One of the Taoist followers of Miko, she manipulated the events of the religious war as a member of the anti-Buddhist faction. As part of her research into immortality, Miko put Futo in a state of suspended animation so she could be revived later as a shikaisen. This occurs when Miko's mausoleum moves to Gensokyo. 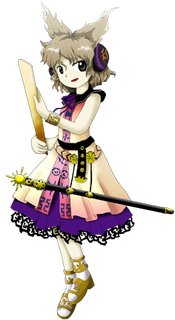 "This era, when humans deny my existence and I have become legend, is what I was waiting for! Now, attempt to defeat me! And I shall become a living legend!"

A former ruler of Japan, known in modern times as the legendary saint Prince Shoutoku

(apparently the part about her gender got lost over time). She publicly advanced Buddhism, and was highly influential in spreading it throughout the country, but she only used it to control the masses. In secret she studied Taoism under Seiga in an attempt to gain immortality. When her own research began to destroy her health, she performed a secret ritual on herself that was designed to put her in a state of suspended animation and then be revived later as a shikaisen. However, she was thwarted by her own manipulations: Buddhist monks placed seals on her mausoleum which prevented her resurrection. She remained sealed until the modern day, when people began to question whether or not Prince Shoutoku was ever a real person.note This is something that actually happened, albeit given as much credit as similar theories about William Shakespeare. This lack of belief in her caused her mausoleum to be moved to Gensokyo, where all mythical beings in Japan go, allowing her resurrection to be completed.

"My transformative powers are still at their prime. Now, shall we begin a ten-game match of danmaku transformations?"

A tanuki from the outside world, specifically hailing from Sado

. She was called to Gensokyo by her old friend Nue to help fight against Miko, but by the time she arrived Miko was already defeated. She seems to have positioned herself as a friend of all youkai, who will help them out when they're in trouble, although she also regularly visits the Human Village in disguise. She originally stayed at the Myouren Temple but no longer seems to be associated with them as of Hopeless Masquerade.