A Little Something We Call "Rock and Roll" 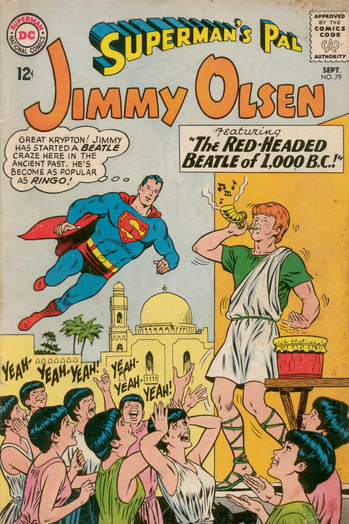 Try not to think about how he can play a Beatles song with one horn and a single drum.
"I guess you guys aren't ready for that yet... But your kids are gonna love it."
— Marty McFly, Back to the Future
Advertisement:

Sooner or later, a time traveler will need to impress the historical types with an artifact or idea from his own era. Sometimes, this may be as simple as This Is My Boomstick; but if said time traveler is a teenager with a penchant for music, these primitive screwheads are about to witness A Little Something We Call Rock And Roll.

Reactions vary, but a historical culture will usually be shocked and terrified, unprepared as they are for a squealing, vaguely Van Halen-esque electric guitar solo. Gradually or suddenly, but often by the time the time traveler has solved their problems (and perhaps learned something himself) rock is accepted, and mundane medieval or prehistoric life will be just a little more "in your face" than our hero found it.

Future civilizations are not immune to this trope. Those which have forgotten their roots may be initially bemused by the crude back beat rhythm, but will learn to "get down" with it. In other cases, they might view the time-traveler's music as "classical" or see it as stuffy "old people" music.

In seriously reality-challenged situations, the time traveler may be able to construct or otherwise produce an electric guitar capable of all the feedback and distortion necessary for a properly face-melting, dad-enraging solo. In other cases, the time traveler may have simply brought a walkman or reproduce rock-like sounds on period instruments. The ultimate pinnacle of radness occurs when our hero has cobbled together a complete band of historical persons and taught them to build and play crude drum sets and keytars built from available materials. Bonus points if they have somehow discovered and harnessed electrical power to make this work.

It's a similar situation when a historical person is brought from the past to the present. This also increases the likelihood of their adopting present day music and slang. And Cool Shades.

Compare Giving Radio to the Romans, in which other types of modern technology are given to past civilizations.

Note: As with The Power of Rock, "Rock" in this trope can be replaced by any form of popular music from the movie's "present". For instance, in a movie is a comedy about the differences between Martin Lawrence and 10th century Britain, funk may be introduced.