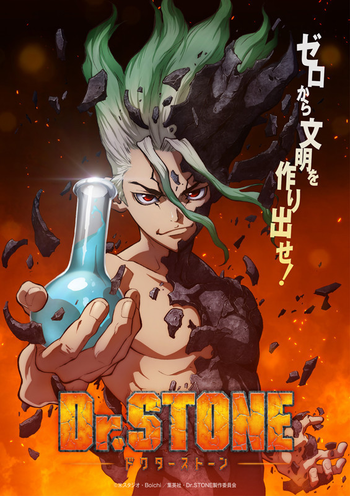 Now this is exhilarating...
"To get from Stone Age to Modern Civilization, it took humanity 2 million years. We are going to rush through it! We will recover the world! We will find out the principles of the petrification and its recovery mechanism... We, two high school kids, are going to recreate civilization from scratch!"
— Senku

Ooki Taiju is finally prepared to declare his love to his crush, Yuzuriha, but just before he can do so... the world ends, with the entire human race (and one species of swallow) turned to stone by an unknown cause. For thousands of years, the petrified Taiju holds to his determination, forcing himself to stay conscious so that one day he can express his feelings to Yuzuriha.

October 5th, 5738 AD. Taiju revives and breaks free from his stone shell. He finds that his frail but brilliant friend Senku woke up some months ago, and that with humanity absent for thousands of years, nature has reclaimed the entire planet. However, Senku has already put together a grand plan - with his brains and Taiju's brawn, they'll solve the mystery of the petrification and rebuild civilization from zero... with SCIENCE.

From the writer of Eyeshield 21, Riichiro Inagaki, and the artist of Sun-Ken Rock, Boichi, comes a science fiction adventure series in Shonen Jump. The series debuted in 2017. In October 2019, it received a 9-chapter spin-off titled Dr Stone Reboot Byakuya written and drawn by Boichi and detailing what Senku's father Byakuya did in the aftermath of the "stone beam".

It received an anime adaptation in 2019

from TMS Entertainment with Yuusuke Kobayashi as our spiky-haired Science Hero. Funimation produced an English simuldub with Aaron Dismuke as Senku, which joined the Toonami lineup on August 25, 2019.

The series has also been announced in April 2020 to have a crossover in Last Cloudia, titled Science-user from Another World, it has started on April 30th and is set to end on May 21st. Senku and Kohaku can be summoned during this campaign. The campaign has been followed up on May 14th with Tsukasa Shishio's Challenge which adds Tsukasa himself to the roster.