The Discovery of Fire 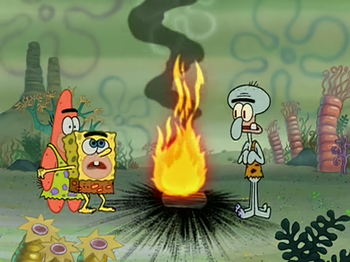 They're underwater. You'd be surprised too.
"We'll be saying a big hello to all intelligent lifeforms everywhere and to everyone else out there, the secret is to bang the rocks together, guys."
— Newscaster, The Hitchhiker's Guide to the Galaxy
Advertisement:

The "discovery" of fire, or in reality the "discovery of how to use fire", is most likely the single most important discovery in human history. Without it, our warm-weather species would never have been able to survive in cold environments, easily digest meats, or ward off dangerous animals the way we do.

Naturally, fiction depicts humans (and other species) overcoming their natural fear of fire and learning to use it as an important turning point in their evolution. This usually occurs either after lightning strikes vegetation or as someone rubs flint and wood together.

Compare to Inventing the Wheel. Naturally, the cavemen are usually Ignorant About Fire, since even if they're not stupid, they've never had any experience with it before.

Being the only Human released from Stone after 3700 years, Senku sets out to recreate civilization again however he can.

Being the only Human released from Stone after 3700 years, Senku sets out to recreate civilization again however he can.