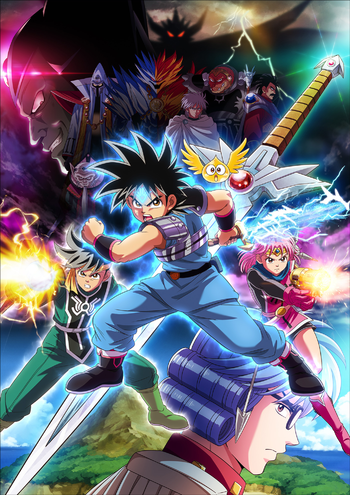 Dragon Quest: The Adventure of Dai (Dragon Quest: Dai no Daibōken) is a Shōnen manga (and later anime) spin-off from the wildly popular Dragon Quest RPG series, written by Riku Sanjo and illustrated by Koji Inada (both of whom later went on to create Beet the Vandel Buster) that originally ran in Weekly Shonen Jump from 1989 to 1996.

The titular hero, Dai, is a young kid who's been raised by monsters on Dermline Island after he was washed ashore as an infant, the only survivor of a shipwreck, and who dreams of being an adventure hero. Since the Dark Lord had been defeated many years before, the monsters have been freed from his influence and are actually quite peaceful — but suddenly, one day, the Dark Lord comes back to life, and the monsters start raging again.

Just then, a "hero trainer" named Avan lands on the island with his wizard trainee, Popp, and sets up a magical barrier, which frees the monsters from Evil's influence. He then proceeds to train Dai to be the next Great Hero, but before they can complete the training the Dark Lord himself shows up, Avan sacrifices himself and fails... but Dai flies into an Unstoppable Rage, awakening his dormant power, siginified by a glowing symbol that appears on his forehead, known as the Dragon Crest. This symbol (which Dai can't fully control) bestows Dai with an incredible power, which allows him to use even the most powerful spells and sword techniques that he's otherwise incapable of. Thanks to this power, he manages to chase the Dark Lord away.

After the battle, he and Popp decide to fight the Dark Lord, to rid the world of evil once again. Thus they start a journey that would take him throughout the entire world. In the process, they meet new allies along the way, such as Maam, a young girl who was also Avan's pupil in the past. Together, they'll have to face the Dark Lord's army, including its 6 legions of monsters, each one led by a powerful general.

An anime adaptation by Toei Animation aired for 46 episodes from October 17, 1991 to September 24, 1992, but it was cancelled after having adapted less than one third of the complete story. The series and manga were translated and released for several European countries and Latin America, changing Dai's name to "Fly". Amusingly enough, the series was used in these territories as a "substitute" of sorts to Dragon Ball whenever they run out of dubbed episodes and/or caught up with the Japanese broadcast, and needed to fill the time slot until new episodes came in. In some countries, like Spain, the dub was even done by the same team that took care of Dragon Ball. Due to this, in those territories there is a quite big overlap between fans of both works from that era.

During Jump Fiesta 2020, it was announced that the manga would receive another anime adaptation, intended to cover the entire manga. Produced once again by Toei, It premiered in October 3, 2020. A video game project developed by Square Enix, titled Dragon Quest: The Adventure of Dai: Infinity Strash, was also announced at the same event. Dai also makes an appearance as a playable character in the Shonen Jump crossover fighting game Jump Force, making it his first appearance in many countries. A mobile phone game, Dragon Quest The Adventure of Dai: A Hero's Bonds, luanched globally on September 28, 2021 for Android and iOS.

A spinoff prequel manga, covering the hero Avan's journey, was published in 2020. Story was again done by Riku Sanjou, this time accompanied by Zipman!!'s Yusaku Shibata.

Not to be confused with the Konami 3D Fighting Game Lightning Legend: Daigo no Daibouken.