Pet Gets the Keys 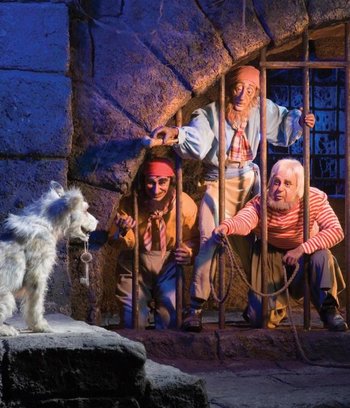 Here boy!
"When I capture the hero, I will make sure I also get his dog, monkey, ferret, or whatever sickeningly cute little animal capable of untying ropes and filching keys happens to follow him around."
— Evil Overlord List, Rule #42
Advertisement:

So, you're in Prison. Or, at least, a jail cell. Or an implausibly oversized birdcage. Your enemies have caught you and, having better things to do than murder you right away, have thrown you behind bars for safe keeping. Or maybe your allies have handcuffed you to a radiator to get you out of the way. But who's not locked up? That animal on the other side of the room... right next to the big ring of keys on the wall.

Now the task is to get the animal to bring the keys (or some other useful escape tool) over to you. If it's your Non-Human Sidekick, this could be as simple as a meaningful wink or special signal. But if it's a critter you're not necessarily on the best of terms with or don't know—or, heavens forbid, one belonging to the enemies who was given the keys for safe-keeping—well, you could be screwed.

A common variation is for the sidekick to have to steal then keys off The Jailer's person.

This often facilitates Cardboard Prison. Sister-trope to Conveniently Placed Sharp Thing and Hooking the Keys. Related to Within Arm's Reach, when an item is conveniently close to the protagonist during a fight scene. Compare Bring Help Back for when there aren't any keys around. See also Jail Bake and Passive Rescue for other ways of getting keys to prisoners, though this is more likely to occur on the spur of the moment than to be a part of a Great Escape. If the imprisoned character is a villain, this is a subtrope of Breaking Out the Boss. May involve a Cool Key or a Dangerous Key Fumble.

For other types of animal rescues, see Heroic Dog, Timmy in a Well, and Saint-Bernard Rescue.

Prisoners try to coax a dog to bring them the keys to their cell.

Prisoners try to coax a dog to bring them the keys to their cell.