Ride / Pirates of the Caribbean 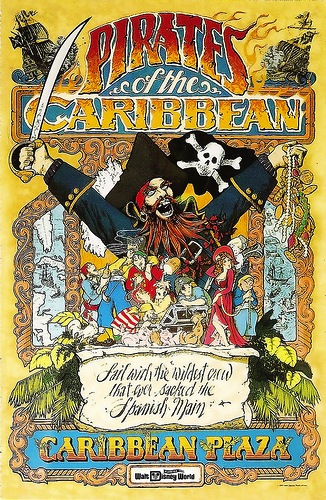 Yo-Ho, Yo-Ho, A Pirate's Life for Me!
"Psst! Avast there! It be too late to alter course, mateys... and there be plundering pirates lurking in every cove, waitin' to board. Sit closer together, and keep your ruddy hands inboard. That be the best way to repel boarders. And mark well me words, mateys... dead men tell no tales! Ye come seekin' adventure and salty ol' pirates, aye? Sure ye come to the proper place. But keep a weather eye open, mates, and hold on tight, with both hands if you please... there be squalls ahead, and Davey Jones waiting for them what don't obey..."
— Jolly Roger at the Disneyland version
Advertisement:

The one Disney Theme Parks ride that launched a successful film franchise, Pirates of the Caribbean was one of the last attractions overseen by Walt Disney himself.

The centerpiece of Disneyland's New Orleans Square (and an anchor of Adventureland in any other park it's since been replicated at), the attraction was originally conceived of as a partially animated wax museum walkthrough before the realities of crowd control and the technical advances from the 1964 World's Fair projects upgraded the plans into a full boat ride full of Audio Animatronics. The end result, which opened in 1967, is widely considered to be a high contender for Imagineering's masterpiece and has become a standard that other rides are judged against.

The ride's structure in most variants is a journey across time (the abridged Magic Kingdom version becoming the exception). As guests board boats in a sleepy lagoon where it's Always Night and long past the days of the Golden Age of Piracy, there seem to be no pirates in sight. However, the leering skull of a Jolly Roger becomes a call to adventure and a warning that Dead Men Tell No Tales ends into a plunge down into caverns full of the remains of a long-dead pirate crew and the cursed treasure they collected during those sinful years. The cave gives way to show us this crew in life, sacking a Caribbean port town. From attacking the village fortress to dunking the mayor to various sins of lust and gluttony, this raid culminates in fire as the city burns while the pirates sing that iconic sea shanty "Yo Ho (A Pirate's Life for Me)". The flames spread further into town and after the boats pass prisoner pirates trying to coax the guard dog into giving them the keys, a drunken gunfight has broken out in the village armoury and gunpowder storage, suggesting the pirates are about to meet their fates while the boats return to the present and back to the lagoon.

The Magic Kingdom and Disneyland Paris have played around with the structure, while Tokyo is essentially a copy of Disneyland's missing a skeleton cave scene or two. Magic Kingdom's variant, hosted in a specially built sub-area of Adventureland called Caribbean Plaza, starts off in a Spanish fortress with audio suggesting the guards are dealing with pirates coming from the coast. The boats evacuate guests through a series of tunnels going past only a couple of the skeleton scenes before plunging down into the bay. This version had a more solid ending with the gunfight relocated to a treasure room where pirates had tied up the guards and were drunkenly shooting in victory. Disneyland Paris's version similarly starts in a fort, but one that has long been ravaged by time. The structure is reversed and expanded here as well with the pirate scenes starting while boats travel through flooded sections of the fort going past the jail scene and pirates crossing over via ropes before plunging down to the village, which features a scene featuring two animatronics swordfighting. The skeleton scenes are placed at the end of the ride, with the gunpowder finally going off and the explosion sending us back to the present to see what became of the pirates.

The version of the ride located in Shanghai Disneyland, given the subtitle "Battle for the Sunken Treasure" is much more of a Recursive Adaptation of the films than its predecessors, featuring a battle between Jack Sparrow and Davy Jones that combines traditional animatronics and sets (including a few nods to the original ride) with advanced projection effects on immense screens for a more blockbuster experience.

Pirates of the Caribbean provides examples of the following tropes: