Film / Fantastic Beasts and Where to Find Them 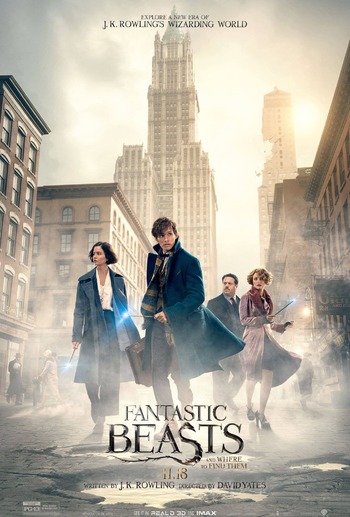 "Yesterday a wizard entered New York with a case. A case full of magical creatures, and unfortunately, some have escaped."
Newt Scamander: I'm writing a book about magical creatures.
Tina Goldstein: Like an extermination guide?
Newt Scamander: No. A guide to help people understand why we should be protecting these creatures instead of killing them.
Advertisement:

The film follows Newt Scamander, a British wizard with a penchant for magical creatures that he keeps in his spacious briefcase, who arrives in the United States in 1926 to do a favour for a friend. Unfortunately, a chance encounter with a No-Maj leads to the two accidentally switching each other's briefcases, leading to a few of Newt's creatures wreaking havoc on Manhattan when the suitcase is opened. When Newt learns of this, he also discovers that magic-related violence has struck the city, with his creatures being seen as a scapegoat for it. With the assistance of an ex-Auror, her sister, and the No-Maj, it's up to Newt to rescue his creatures, clear his name, and uncover the source of the magical violence occurring in New York City.

Behind The Scenes Featurette,

open/close all folders
A-E
F-J
Tina: If you haven't said all those nice things to Madam Piquery about me, I wouldn't be back on the Investigative Team now.
Newt: Well, I can't think of anyone I'd rather have investigating me.
(cue awkward Oh, Crap! expression)
K-O
P-T
U-Z
"Will we die, just a little?"