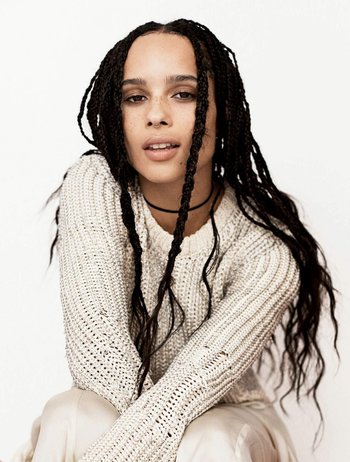 Kravitz is perhaps best known for her roles in franchise films, most notably Mad Max: Fury Road as Toast the Knowing. She also appeared in X-Men: First Class as Angel Salvadore, The Divergent Series as Christina, and Fantastic Beasts as Leta Lestrange. She also provided the voice of Catwoman in The LEGO Batman Movie, later portrayed the character in live-action in The Batman (2022), and voiced Mary Jane Watson in Spider-Man: Into the Spider-Verse.

In addition to acting, Kravitz is also the frontwoman of Lolawolf, who've released one studio album and two extended plays. She’s also written songs for other artists, including Taylor Swift.

Her parents are actor and musician Lenny Kravitz and actress Lisa Bonet. Both of them have Jewish and Black ancestry, thus Kravitz does also, and identifies as being a secular Jew. Bonet was married to Jason Momoa from 2017 to 2022, making him Kravitz's stepfather for those years. She has two younger half siblings due to their marriage.