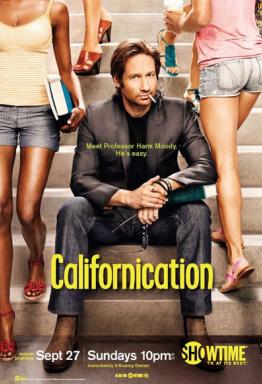 Duchovny plays Hank Moody, a ladies' man and occasional novelist who likes his booze and pot a bit too much. When he is first introduced in the first season, his life has slowly fallen apart since his longtime girlfriend Karen (McElhone) left him. He struggles to be a good parental figure to his and Karen's daughter Becca (Madeleine Martin), and he fails to produce any kind of written work due to his drug use and sex addiction. He becomes more unstable especially after his book, "God Hates Us All", gets turned into a gooey, flowery movie called "A Crazy Little Thing Called Love". His producer and best friend, Charlie Runkle (Evan Handler) constantly goofs up mishap after mishap, as his marriage to his wife Marcy (Pamela Adlon) crumbles.

Not to be confused with the Red Hot Chili Peppers album of the same name, or with Hollywood Provincialism, a trope that is often called "Californication" outside this wiki (especially in the western US)note It's usually associated with Southern California-style suburban sprawl, though it's also used to refer to the "big city" attitudes that many Californians bring with them when they move to places like Colorado and Oregon..