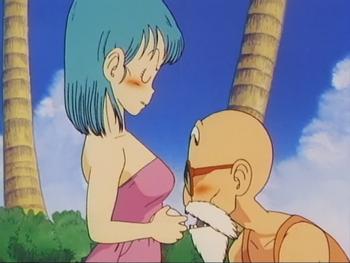 "My face is up here."
"But mine is DOWN HERE! HEH, HEEH!!"
Mike: I can't keep burdening Lisa forever, but I do have a Happy Box and nice-bodied girls like Nan and Linda to keep me company, so I'm pretty happy in my own way. Nyahahahaha!
Linda: I'm sorry, Mike, but that's called sexual harassment these days.
Mike: This is a hard world we live in now. How disappointing.
— Mother 3
Advertisement:

Just what he sounds like — an older male character, usually unattractive in some way, who takes more than a passive delight in young women, ahem. Sometimes he limits himself to just talking dirty and propositioning cute girls, but sometimes he takes matters into his own hands. Literally. He's not The Casanova, nor is he necessarily trying to be — but he certainly won't complain if things work out that way for him.

The "old" part of his description is mostly relative to the girls he accosts — a creepy thirty-something teacher eyeing his junior high school students is no less a Dirty Old Man than a geezer in his sixties pinching the bottoms of housewives in the supermarket, though it's worth bearing out that a younger Dirty Old Man's behavior is going to be seen as a good deal less harmless than that of his hoary-headed counterparts. Probably because a Dirty Old Man is supposedly less likely to chase his victims, or force worse things upon them. There's also the fact that regardless of the man's age, it's almost invariably considered less harmful for him to turn his attention on fully matured women, as opposed to girls who are still developing. Of course, since some men start looking semi-elderly as early as their late twenties, for all practical purposes, this trope covers a wide latitude.

When played for comedy he is either a disgusting pervert who gets beaten up by the girls he assaults or a delightful rogue whom the girls tolerate. When played seriously, he's usually some variety of sexual predator or mistaken as such, and finds it hard to prove his innocence.

The character's personality will usually be at least a little sympathetic, with him as either an amusing clown character or a Mr. Vice Guy. Of course, if he crosses the line into rape or worse, all bets are off.

In Britain, these characters are typically seen wearing brown mackintosh coats, which allow concealment of a certain activity, leading to them being referred to as "the dirty mac brigade." In the U.S., it has long been popular to depict this fellow traipsing around in a Conspicuous Trenchcoat (often with the innuendo that he's wearing nothing but the coat).

For an anime variant which is somewhat less old, see Lovable Sex Maniac. Played sympathetically, this character is likely to fall under Chivalrous Pervert, and this is likely to be established early on to show that while he may be looking at them longingly, he has standards and will follow them religiously.

Dirty Old Woman is the female equivalent of this trope. If the work means to portray the older man-younger woman dynamic in a more sympathetic or even romantic light, it isn't this trope, but May–December Romance.

Frollo starts to develop an unhealthy obsession over Esmeralda, a gypsy woman.

Frollo starts to develop an unhealthy obsession over Esmeralda, a gypsy woman.