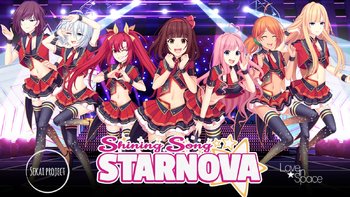 Lighting up the night sky!
Brighter than anyone else!
We're not finished yet!
We are!
STARNOVA!

The seven girls of Shining Productions have fallen on hard times. Despite being united in their desire to become idols, they are all broken in their own ways and considered unfit to work in the industry.

Enter you, Mr. Producer. With your help, the girls debut as the idol group “Starnova” and work their way up in the entertainment industry.

However, the girls soon realize the entertainment industry is nowhere as perfect as seen on television, for many dark secrets lie behind fame. The girls will have to deal with many enemies, in particular the rival idol group Quasar and its producer, CEO of Golden Calf Seiichi Kamijou, as he seeks to destroy Starnova to make Mr. Producer pay for leaving his company. This is the story of the girls' trials, laughs, and tears, as they walk the thorny path to stardom…

Shining Song Starnova is a Visual Novel created by Love In Space, the developers of the Sunrider franchise.

. It was first announced in 2016, and was successfully funded via Kickstarter and Patreon in 2017. The game was officially released on July 25th 2018 via GOG.com, and was subsequently released on Steam September 13th of the same year.

No relation to Phantasy Star Nova.