A Lighter Shade of Black 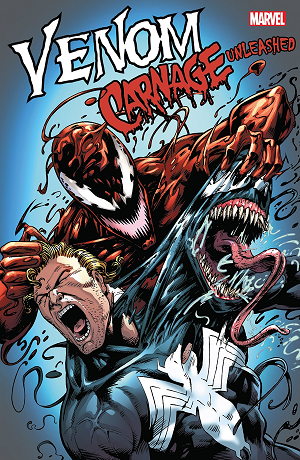 In this case, the red one is worse.
"I'm just a bad guy who gets paid to fuck up worse guys."
— Wade Wilson, Deadpool (2016)
Advertisement:

While Evil Versus Evil may be fun, it carries the risk of making people say "Too Bleak, Stopped Caring": people just do like having someone to cheer for, but if both sides are equally reprehensible, then there's really no point to it.

So that's where this trope kicks in. It basically means that the author is clearly trying to portray one side of the conflict as the better or more sympathetic one, so the audience can root for them. Since both sides are supposed to be villains, this isn't that hard. You just need to give your Lighter Black a little edge on the sympathy meter. The idea is to have the audience say "Yeah, Alice may be evil, but at least she's not half as bad as Bob!"

This can be done in many ways. Give your villain the Sympathetic P.O.V.. Have them Pet the Dog, be a Noble Demon or invoke Even Evil Has Standards. Perhaps they're simply a smaller threat to the world. Maybe their goals are, or used to be, somewhat sympathetic. Maybe they have many Evil Virtues. Or, when compared to the opposition, their cause still seems a little more "right" or their character "pure" than that of the enemy. Sometimes, Bob just needs to be stopped at any cost, and Alice happens to have that goal in mind, if only for selfish reasons. Since we want them to win, this may lead to a villainous version of Right Makes Might and Pure Is Not Good.

Or maybe the villain is such a dangerously efficient operator that it's easier to side with them. Especially if their opposition is a threat to everyone.

If they shoot way over the line, the character in question may end up doing a Heel–Face Turn. This is generally a trait of most Enlightenment fiction that believes Rousseau Was Right.

See also A Lighter Shade of Grey, Nominal Hero, and Shades of Conflict. An exaggerated form of this trope is Evil Versus Oblivion. The polar opposite of Viler New Villain, when a villain is shown to be worse than the nobler villain. For a downplayed form, see Black-and-Gray Morality.

Do not confuse this trope with Lesser of Two Evils, in which case, there still isn't a side to root for. Those stories usually involve a hero's P.O.V. and he's observing the two villains fighting each other.