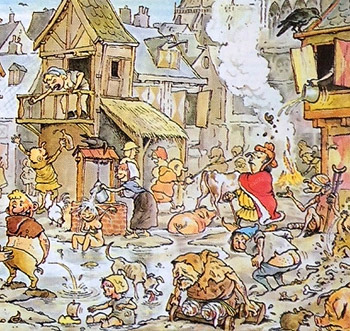 Those were really shitty times.
"I mean, that's the thing about the past that people forget. All the shit. Animal shit. People shit. Cow shit. Horse shit. You waded through the stuff. You should spray 'em all with shit as they come through the gates."
— Hob Gadling at a Renaissance Faire, The Sandman (1989)
Advertisement:

A really crappy time to be alive. Literally.

The Dung Ages are the representation of the Medieval Era as a Crapsack World of pustule-faced, cat-beating, dung-caked, mud-farming peasants, the antithesis of Ye Goode Olde Days, made popular by the Monty Python team. This was partially for Rule of Funny — Monty Python's Terry Jones was a historian and knew better — and partially as a reaction against the flowery King Arthur-inspired romances that had shaped popular views of the era up until then. Portrayal of the Dung Ages is not limited to Britain and/or the Dark Ages. It's often seen even in portrayals of cultures where it doesn't belong. Many ancient Romans, for instance, bathed every day: once soapmaking arrived from Gaul, the Roman Patricians who could afford it used soap with abandon, possibly to a greater extent than we do.

The core of this idea and portrayal is summed up in the page quote: prior to the widespread adoption of underground sewage infrastructure in the late nineteenth century, human shit and the menagerie of diseases associated with it were everyday sights and smells. This was especially true for armies and towns.

Something to keep in mind is that neither The Dung Ages nor Ye Goode Olde Days is "more" accurate than the other. The reality is that while hygiene was not good by modern standards, and living conditions were not what we'd call "comfortable" (what with the lack of air conditioning, flush toilets, and weekly garbage pick-up), neither did most people walk around barefoot, caked in filth, eating rotten food and living in tumble-down huts made of sticks.

See the analysis page for more details on the historicity of this trope.

More common in literature or live-action works, since animating a lot of dust, dirt and grime is harder than having everything be clean.

Strong aversions of The Dung Ages are examples of Ye Goode Olde Days and should be put there. For depictions of history being more socially progressive than truly accurate for the time, see Politically Correct History. The growing Dungeon Punk subgenre blends Dung Ages squalor with Dungeons & Dragons/Sword and Sorcery tropes and modern-day aesthetics. See also Medieval Morons.

Bring Out Your Dead

The Middle Ages portrayed as a very filthy time.

Bring Out Your Dead

The Middle Ages portrayed as a very filthy time.