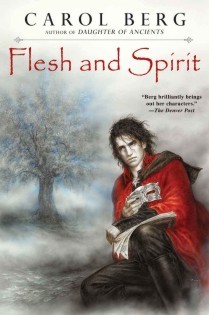 The Lighthouse Duet is a series of two fantasy books by Carol Berg.

In the land of Navronne, people with magical abilities (called "purebloods") live under tight restrictions, forced to register with the local government and sold into indentured servitude based on their talents. Valen, the son of the Cartamandua family, a line of cartographers and diviners, rebelled against these restrictions, running away and trying to make a living while using magic sparingly.

That didn't work out, and after being betrayed by a former business partner, he was left for dead at an abbey, his sole remaining possession of value being a book of enchanted maps that are said to lead people to hidden places. With nowhere else to turn, he becomes a monk, all the while plotting for how he will escape.

Of course, nothing is that simple, and it turns out that the abbey has secrets that may put his life in even more danger.

The series takes place in the same universe as The Sanctuary Duet.