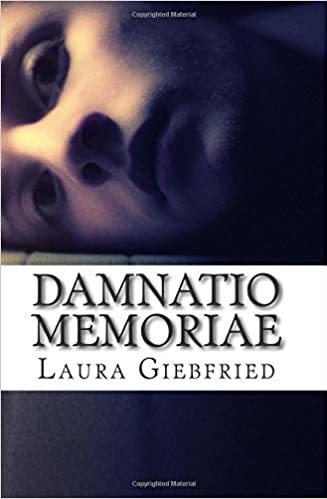 "No one wants to be forgotten."
— Albertson to Enim.
Advertisement:

Damnatio Memoriae is a Young Adult Psychological Thriller and Comingof Age Story by Laura Marcelle Giebfried. It focuses on Enim Lund, a seventeen-year-old boy whose only goal is to finish his last year of school and forget the tragedy involving his mother the Christmas beforehand – a feat that should be easy given that he attends Bickerby Academy, an all-boys boarding school on a remote island off the coast of Maine. His plans are thwarted, though, when a teacher vanishes without explanation and a local girl’s body washes up on shore. With all signs pointing to one of Bickerby’s students, Enim’s best friend Jack Hadler convinces him to investigate the crime.

As Jack becomes more and more obsessed with finding the killer, Enim finds himself consumed by his own responsibility in the accident that befell his mother, and neither can seem to find a way to acquit himself for the crime. It soon becomes clear that there are worse things than not solving the crime: it’s doing so but having no one believe you.