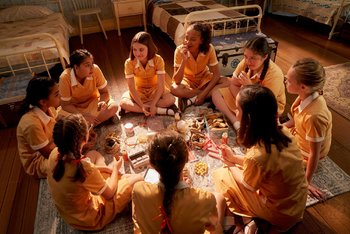 The misadventures of students at "public schools" (British term for most private schools, which are commonly boarding schools) were once a staple of children's literature but fell out of fashion in the sixties. Starting in the late 1990s, however, the Harry Potter series, a Heroic Fantasy taking place in a wizarding boarding school, revived many of its tropes (although significantly breaking from the tradition by making the school mixed instead of single-sex; and also free to attend).

Boarding schools may be "public" schools where the pupils are not charged a tuition fee and/or the pupils are selected on their talents or meritocratic basis, or "private", where the pupils (or rather their parents) are charged a tuition fee (which may or may not be outrageous). In Britain, public schools are private and do charge fees, unless you're a scholarship student, and both terms are used more or less interchangeably. See Useful Notes or the Other Wiki for explanation.

Mostly, the boarding schools depicted were for the aspiring middle classes, so did not have particularly elaborate facilities. The biggest educational difference from other schools was the syllabus, which led to a few jokes about Latin, but the classrooms were typically much like any other because that wasn't where the story was.

The story was in the fact that they were boarding schools; the children lived on the premises, sharing dorm rooms. The Boarding School genre revolves around the impact of this — children, separated from their parents, growing up together. All the advantages of having a story about orphans sans the tragedy of dead parents.

Quite often, the school buildings would be old and in fairly bad shape - leaking roofs, faulty heating, and clanking pipes - leading to stories where the children attempted to raise enough money to save their school. If the boarding school is in an old castle or manor house, the kids may explore and find hidden BookcasePassages, SecretUndergroundPassages, and SecretRooms, in which they may find antiques and mysterious items.

Common elements in the Boarding School genre include the following:

Hell, it's amazing they ever get any work done.

The Good Old British Comp is the other UK school trope. Overlaps with Elaborate University High, if the boarding school has many buildings. Contrast with Off to Boarding School, which generally portrays the experience as negative, along with the Boarding School of Horrors, which is even worse.