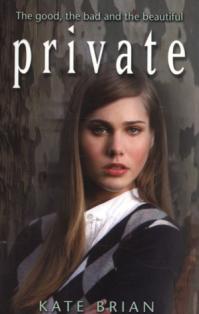 The Private series is a young adult set of novels (currently standing at 13 as of May 2011) written by Kate Brian. Set in the glitzy, ultra-rich world of Easton Academy, the books follow the life of Reed Brennan, a Scholarship Student to the academy. In the first novel, she is a typical Fish out of Water character, but as the series progresses, we see her climb her way to the top of the social ladder.

What makes Private really stand out from other similar chick-lit novels is the revelation in each book of a psycho, murderer or general Rich Bitch character who tries to make Reed's life hell. Think of Gossip Girl meets The Clique with even more obnoxious characters. All in all, an excellent example of a Guilty Pleasure. Now has its own Character Sheet under construction.

A Web Video series based on the first four books premiered in May 2009 lasting twenty episodes. The series was produced by Alloy Entertainment and a promotional trailer can be seen here