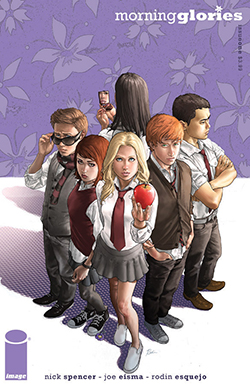 For a Better Future
Advertisement:

An ongoing comic book series written by Nick Spencer and illustrated by Joe Eisma. It tells the story of six new students (Casey, Ike, Jun, Zoe, Hunter and Jade) at the very prestigious Morning Glory Academy. Each one of them has a dark and/or strange past and they all share the same birthday. The plot follows the six students separately and as a group as they explore the mysterious and shadowy purpose of this dizzying Boarding School of Horrors. The phrase "for a better future" is thrown around a lot by the staff, but it's hard to tell what that entails. The teachers are down right sadistic, the campus contains strange horrors and there's a ghost-like man stalking around who really enjoys making a mess of people. To top it all off, Daramount, the woman in charge of the these six students (nicknamed the Morning Glories) is trying to systematically break them in increasingly creative ways.

The tone and feel of the story so far is something akin to Lost in its earlier seasons: lots of character exploration and flashbacks amid completely baffling events that seem to hint toward a bizarre and complicated machination. It has also been compared to Gunnerkrigg Court in that it's about students exploring the weirdness of a boarding school with possibly dark purposes.

Warning: spoilers are beyond this point.