Give Geeks a Chance 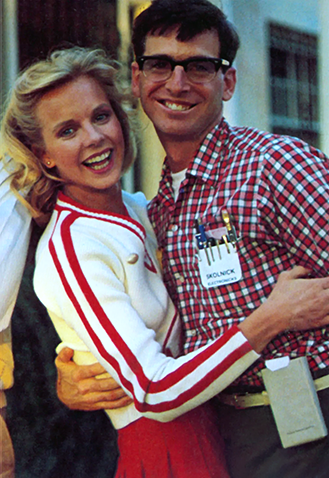 A trope common in Romantic Comedies and Teen Comedies, in which a dorky (not necessarily ugly, just... geeky) guy ends up with the totally hot babe. Generally, the geek begins the story as an outcast to whom the beautiful girl would never be attracted. He may be a band geek, or a scientist with all the social graces of a tube worm, or a D&D player who still lives in his mom's basement. And through the course of the story, she begins to see through his spaz-like exterior to the decent, love-worthy man within.

Often, the guy will be smitten with the girl the first time he sees her. She, on the other hand, won't be attracted at first, and will often fight the attraction later on in the story. Eventually, despite whatever Three's Company-style misunderstanding crops up (and it will; you can count on it) she comes to realize that there is more to the geek than his pocket protector and love will bloom. It is never Love at First Sight for the babe, in any case.

Related to Ugly Guy, Hot Wife, and subject to the same Double Standard, since gender inversions are practically non-existent; there may be more to the male geek than his pocket protector, but for women, looks are the only thing that does and should matter. If a Hollywood Homely geek girl (or Hollywood Homely non-geek girl, for that matter) sets her sights on a hot guy, she might be able to make a few slight alterations, but it's more likely she'll just be the Abhorrent Admirer who makes him run away in terror. Hence why this trope is beginning to experience some backlash lately.

Also extremely rare is the male geek that actually considers a similarly geeky girl, due to the latter's rarity in media in general, unless the geeky girl is a "nerdslut" who Really Gets Around with nerds in general, in which case she's at best a second choice in comparison to the hot babe. This holds even for works aimed at a female audience, and therefore any nerdy girl will eventually be revealed to be Beautiful All Along.

In general, this is slowly becoming obsolete as the terms "nerd" and "geek" become less pejorative, and "nerdy" interests in general are becoming increasingly more mainstream.

Compare Savvy Guy, Energetic Girl and Nerd Nanny. See Nerds Are Sexy, Endearingly Dorky and Geeky Turn-On for when the attraction isn't despite nerdiness, but because of it. Contrasts with All Girls Want Bad Boys. Often overlaps with Just Friends.