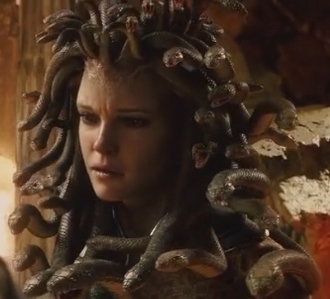 Wait, this is the hideous beast? But her snake hair is beautiful.
"I think it's incredibly hard to find a contemporary Medusa that is asexual. The best example I have ever come across is the Lego version, we see her briefly in The LEGO Movie. And to be fair, Lego Medusa is not minxy. But almost every other version of modern Medusa, she's played by a model, she's played by Uma Thurman, she's played by Rhianna. She's somebody incredibly gorgeous, and at the same time, like you say, she has this monstrous hair, and that's the thing we're supposed to respond to, I think, the combination."
-Natalie Hayes, Natalie Hayes Stands Up for the Classics, "Medusa"
Advertisement:

Passing through Adventure Town, The Hero hears from the Quest Giver that there's a hideous she-monster bedeviling the town. A creature so ugly she can stun those looking at her and make them wish they'd brought their brown pants, she's so repulsive. The worst part is that her monstrous mien is like a car-wreck, you can't look away. This may be compounded by her hypnotic gaze...which can be triply bad if it can also turn onlookers into stone.

Except, once the hero actually sees her... she's actually rather pretty. Sure, she has snakes for hair, glowing red eyes, fanged teeth, bat wings, and scaled skin... but her face is perfectly symmetrical, even classically beautiful. The snake-hair is actually rather playful, and her scales are colored not like a deadly coral snake, but opaline. Scaly her face may be, but the scales will be delicate, tinted like cosmetics. And she has curves, to be sure, if peculiarly serpentine ones.

The hero has just met the Gorgeous Gorgon. Her beauty can be due to one of four causes. The most common is that she merely has an Informed Flaw in the form of her ugliness, much like older actors are treated as if they were teens due to Dawson Casting. Everyone reacts like she's ugly and says so, but the viewer doesn't really see why. Or that touch of human appearance causes the whole thing to slip from just being a monster headlong into Uncanny Valley Girl territory due to the dichotomy. Alternately, she may be using some form of Voluntary Shape Shifting or magical glamour to appear more beautiful than she naturally is in order to confuse the hero. The more subtle interpretation is that the townsfolk have Flanderized her ugliness because she's, well, a monster. This may be explained by her inhuman features and the fact that, if we were to meet a person with a snake tail or four arms in real life (for example), we would be scared too, or at least greatly surprised and startled.

If the latter, this usually presents one of two alternatives.

One, the ugliness is played up by the superstitious townsfolk, who are so scared of her appearance (or unintentional dangerousness) that none of them bothered to notice she's actually a Reluctant Monster and very lonely. This Gorgeous Gorgon will likely prove friendly and even pull a Heel–Face Turn (if "evil" to start with) when shown some compassion.

Two, the "beauty" is only scale-deep. This creature is much like Daddy's Little Villain, she is evil through and through, and hides it behind an angelic (scaled) face to confuse victims. She'll try to win the hero's pity before mating, killing, and then eating him. (And if he's very lucky, it'll be ...In That Order). This Gorgeous Gorgon is perfectly fine to kill.

These two alternatives can be seen as playing with Beauty Equals Goodness. In the first, the slightly hidden physical beauty is a sign of the internal goodness, in the latter, it represents the danger inherent in Evil Is Sexy.

Another less-often but still used trope is that the Gorgeous Gorgon pissed somebody off by being so good looking, and was subsequently transformed into a monster. The transformation, though, wasn't quite enough to make her ugly.

The title of this trope itself, by the way, has solid foundations in later interpretations of Greek Myth where the Gorgons became Progressively Prettier, at least in literature if not art. In the oldest versions of the Gorgon legends, they were said to be hideous-looking, hence Medusa's classic snake hair and scaled face. Older depictions show them with bulging eyes and fangs, with evil grimaces (often considered a direct comparison to a rotting corpse). But as centuries passed, many tellings had the Gorgons as mortal women more lovely than Aphrodite, causing that goddess to curse them such that any who saw their loveliness would be turned to stone. Others went so far as to say the Gorgons were so beautiful, their faces could stop men's hearts. Another version is that Medusa was originally a beautiful temple maiden, and Poseidon was so captivated by her beauty that the two became lovers, going as far as to have hanky-panky in Athena's temple (where Medusa was the high priestess). Athena, disgusted that the maiden would do this, turned her into a Gorgon as punishment. It's worth repeating that, despite Gorgon being in the trope name, other types of monsters and genders can have this apply. Do note that some researchers have linked the gorgons to pre-greek solar goddesses, making this a Cyclical Trope.

Note that while much "classical" art portrays Medusa (after her change) as horrifically butt-ugly, the whole Cute Monster Girl and Not Evil, Just Misunderstood thingie is a fairly old interpretation, although more prominent in modern takes.