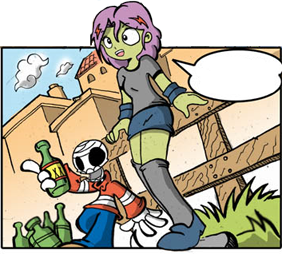 Pilli Adventure is a Animesque World of Weirdness Web Comic about the adventures of a Goth Mexican girl, her foreign best-friend, her more energetic friend, and her boyfriend's soul (which she has stuck in a "Day of the Dead" skeleton doll).