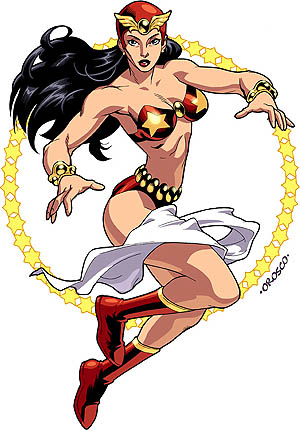 Darna is a superhero from Philippine comic books, created in 1950 for Pilipino Komiks by writer Mars Ravelo and illustrator Nestor Redondo. One of the most popular Filipino superheroes, she has appeared in many movies and several television series through the decades which have far overshadowed her actual comics tenure.

After an ordinary girl named Narda swallows a magic white stone, she transforms into the mighty warrior Darna by shouting "DARNA!". As Darna, she stands up for those who cannot fend for themselves. She fights against both common criminals as well as greater forces of evil, most famously the snake-haired woman Valentina. She is often accompanied by her younger brother, Ding.

Tropes associated with Darna include: