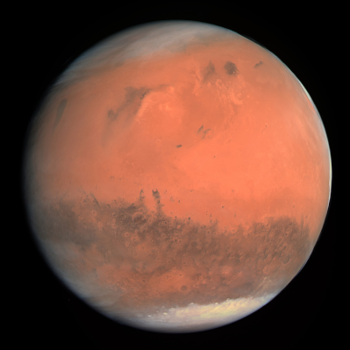 dun, dun-dun-dun
Profile
Advertisement:
"You need to live in a dome initially, but over time you could terraform Mars to look like Earth and eventually walk around outside without anything on... So it's a fixer-upper of a planet."
— Elon Musk

Ah, Mars. Its vivid red soil has entranced the imaginations of humans since it was first identified.

In the late 19th century, astronomer Giovanni Schiapparelli note Uncle to the surrealist couturier Elsa Schiaparelli observed what appeared to be water channels on Mars. When his writings were translated into English, the Italian word canali was misleadingly translated as canals (the actual Italian word for "canals" is "canale", with an "e"). For decades afterwards, it was widely believed that these had been built by intelligent aliens. Predictably, Martians featured in a large amount of Science Fiction of the first half of the 20th century.

However, when NASA's Mariner 4 probe flew past Mars in 1965, it was conclusively shown that the canals didn't actually exist. When the Viking probes landed (the Soviets got there first with Mars 3, but the lander was taken out by a dust storm 14.5 seconds after landing), the planet was shown to be lifeless, and the concept of Martians quickly became discredited. More recent observations suggest that Mars may have supported life in the distant past, and some people still cling to hope that life may reside underground, no matter how unlikely it is. However, the Red Planet has had such a hold on human imagination for so long that it is not going to be lost as a setting any time soon.

probe reached the planet; equipped with more advanced technology, it was able to take a number of impressively high resolution photographs. One of these showed

what appears to be a human face. Though quickly debunked by every legitimate authority, it has taken its place alongside the Nazca lines and the Pyramids of Giza in conspiracy lore — especially as one of the photographs from the mission has yet to be declassified. Fictional representations of Mars were changed as well; no longer a destination, but a stepping-stone to greater glories in the form of ancient ruins filled with Lost Technology, waiting for humanity to discover it and thereby leapfrog into the stars. One way or another, that particular argument will remain unsettled until people actually go there unregulated.

More modern stories tend to have Mars being colonized, either as a plot point or part of the Back Story. This isn't an unlikely scenario in real life; it has more of the basic elements needed for life than any other non-Earth world in the solar system and it's quite similar to Earth in several aspects, including day length (24h 39m 35.244s), temperature (-2 to -87 °C, chilly, but overlaps a fair amount with Earth, albeit the coldest parts of Earth), and an atmosphere (although Martian "air" is mostly carbon dioxide and averages about 1/100th of the Earth's pressure). It's also our neighbor along with Venus (which we have yet to keep a probe functioning on for more than a few minutes). For these reasons, Mars is the planet that is most frequently subject to Terraforming. Strangely, regardless of how otherwise Earth-like it may be, Mars tends to retain its distinct red soil. The weak gravity and thin atmosphere also means that dust storms go Up to Eleven on Mars. Every so often, a gigantic dust storm will cover the entire planet in a thick cloud of particles.

Because the Martian day is almost, but not quite, the same length as Earth's day, NASA scientists working on Mars missions reckon the local time there by "sols" (Martial solar days). There's no special name for the Martian year, however.

Despite its many Earthlike qualities, Mars is nowhere near as big as the Earth. It's only half the Earth's diameter and its surface gravity is only 0.38 g (38% of Earth's surface gravity). The reason for this is that when Jupiter migrated inward towards the Sun, it robbed Mars of material to form with; scientists believe that had Jupiter not drifted inward, Mars would have been the same size as Earth and Venus. The total surface area of Mars is about equal to the land surface area of the Earth (i.e. that small portion of the Earth's surface that isn't under water). Nevertheless, Mars has a canyon system (Valles Marineris) that's far, far larger than Earth's Grand Canyon, and a volcano (Olympus Monsnote Not to be confused with the Olympus Mons from Classical Mythology. Or Olympus Mons) that's far, far larger than Earth's Mount Everest.note The reason is that there is no continental drift on Mars, so the same vent was used over and over by Mars, unlike Earth, where the vents will drift — just ask the Yellowstone Caldera, or Hawai'i. Unlike Everest or most other large mountains on Earth, Olympus Mons is not steep at all. On the contrary, it rises so gradually that in terms of land area it's roughly the size of France, and a person standing at the base of Olympus Mons would be unable to see its summit because it would actually be over the horizon. Olympus Mons and Mariner Canyon both lie on a region called the Tharsis Bulge, essentially a seven-kilometer high (that's before adding the altitude of the volcanoes) bump on the planet's surface caused by a massive upward magma flow beneath that entire area. Olympus Mons is the largest of many volcanoes sitting on the bulge. When these volcanoes were being formed, the pressure caused by the upward magma flow caused a part of the crust to split open, creating the Valles Marineris. Depending on how the boundary of the Tharsis Bulge is defined, it covers up to twenty-five percent of Mars's surface area.

One unusual feature of Mars is that its northern and southern hemispheres are so dramatically different in geography. The northern hemisphere is largely smooth (and it is theorized that much of it was once covered in water), while the southern hemisphere has very rough, cratered ground that averages 1–3 kilometers higher in elevation. Given the sheer improbability that asteroids and meteors would only strike half of a planet, astronomers have been trying to figure out why this would be the case ever since detailed photographs of Mars first became available. In the last decade, study of the northern hemisphere has indicated that a single massive impact by an object about 2/3rd the size of Earth's Moon may have wiped away all smaller craters and other irregularities on the northern hemisphere. The signs of this enormous crater, bigger than the next four largest in the solar system combined and covering some 40% of Mars' surface, were obscured by over a billion years of volcanic eruptions along its rim. It has been argued that the difference in cratering is because Mars once had a shallow ocean covering most of its northern hemisphere. While there is no evidence to disprove this claim, there is also no conclusive evidence for it either.

The most damaging is that Mars has a core that's dead, with very little tectonic activity,note InSight's SEIS seismometer has picked almost 200

weak marsquakes until September 2019 so there's no magnetic field to keep the solar wind from keeping the planet more or less sterile. Although science holds out hope that they will one day discover evidence that life once existed on Mars, there's very little hope they will find life living there now.note This might seem like a problem for colonization, but isn't really; building largely underground — as most serious proposals call for — handles the radiation problem pretty handily. Many current proposals for colonization indicate that lava tubes — basically big caves where ancient lava had flowed underground and then shrank as it cooled, leaving a big empty tunnel — would be a good spot to settle. Worse than that, the Martian soil is now known to be extremely rich in hexavalent chromium (known for short as HexChrome), one of the most potent carcinogens known to man.note You may recognize it as the chemical that Erin Brockovich's law firm sued PG&E over for contaminating the water supply in Hinckley, California. Today, the moons Europa and Enceladus are considered more likely to currently harbor life, both having verified subterranean liquid water and the protection of their respective home planets' magnetic fields. (Europa's surface ice is also a protective barrier from Jupiter's latent radiation.) While in 2015 it was finally verified that there is indeed liquid water on the surface of Mars, the lack of a magnetic field and toxic soil would still be severe obstacles to life. However, despite the odds, there is a chance extremophiles live inside Mars, after all life has been found to thrive inside of otherwise lethal conditions such as tar pits, geothermal pools, and on the bottom of the ocean in geothermal vents.

And as we all know from pop-psychology, men are from there. Not the kind of place to raise your kids.

Mars has two moons, called Phobos and Deimos. They were discovered in 1877, later than all the major moons of all the outer planets, and are named after two figures from Greek mythology.note sons of Ares (the Greek counterpart of Mars) and Aphrodite (Venus), They are both extremely small; Phobos, the larger of the two, is only ten miles across, and Deimos is half that. Their surface gravity, such as it is, can be measured in micro-g. They're really not much more than irregular rocks, asteroids that were captured by Mars' gravity.note Possibly. Their orbits are rather unusual for captured asteroids, since they each have a near-circular rather than elliptical path and each orbits at relatively low altitude. As such they might be products of a debris field from the hypothesized giant impact on Mars' north hemisphere. Irregular rocks named Fear and Panic.

Although these moons both orbit the planet in the same direction, Phobos is close by (nearer than any other known moon to its parent planet, in fact) and orbits faster than Mars rotates, while Deimos is farther away and orbits slightly slower than Mars rotates. Phobos rises in the west, sets in the east, and rises again in the west 11 hours later. Deimos rises in the east, sets in the west 2.7 [Earth] days later, and rises in the East again 2.7 days after that. What this essentially means is that at some point Deimos is going to fling itself into space (hopefully not in our direction), while Phobos, held together only by its own gravity, is going to disintegrate when tidal forces break it apart as it gets too close.