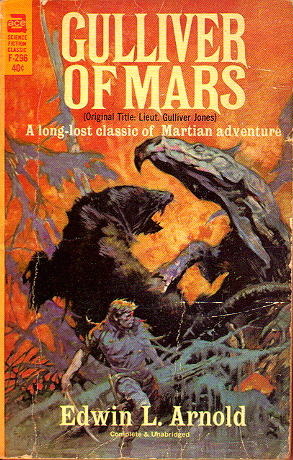 Also know by its original title Lieut. Gullivar Jones: His Vacation was a very early Planetary Romance novel written by Edwin Lester Arnold, first published in 1905. It told the story of Gullivar Jones, US Navy Lieutenant who ends up in possession of a strange carpet that magically transports him to the planet Mars. There, he has many adventures, interact with alien civilizations and falls in love with a princess. The book was not a critical success and Arnold retired shortly after its release, although it ended up being his best-known work. The book predates Edgar Rice Burroughs' Barsoom series by a decade and its usually considered by many an inspiration, noting many similarities between the two. While Gullivar has not enjoyed the same level of popularity as John Carter, he has not remained completely obscured for Marvel Comics adapted his story in comic book format as Gullivar Jones: Warrior of Mars, written by Roy Thomas and penciled by Gil Kane and Bill Everet. Gullivar would also cameo in The League of Extraordinary Gentlemen Vol. 2 alongside John Carter as they witness the launch of the Tripods. Dynamite Comics would also bring Jones and Carver together in their 2012 miniseries: Warriors of Mars.