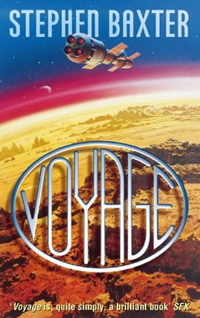 Voyage is a 1996 Alternate History novel by British science fiction writer Stephen Baxter. It is set in a timeline with a simple divergence from our history: Lee Harvey Oswald didn't manage to assassinate US president John F. Kennedy and, by accident, shot his wife instead.

The alternate 1960s pass mostly in a vein similar to our own history, but subtle little divergences keep popping up. The final, major divergence of the timeline occurs after the first Moon landing in 1969. The now-retired president Kennedy is allowed a few moments of radio contact, in order to do a little congratulatory speech to the Apollo 11 crew. To everyone's surprise, Kennedy very blatantly hints at the need to focus on making a similar landing on Mars in the coming decade. This eventually forces NASA to cave in to popular pressure from people that were moved by Kennedy's speech. In about two years after the first Moon landing, the history of American astronautics starts taking a rather different route than the one we know...

The novel then follows - both in chronological and anachronic order - the various spaceflight developments of the 70s and 80s, through the eyes of a diverse cast of primary and secondary characters (some historical, some fictional). In the late 1970s, NASA launches a test flight of a promising and much-touted Mars spacecraft. However, things go awry... The American space program is then forced to work quickly on a new solution for the Mars mission, or else it's curtains...

The novel won the 1997 Sidewise Award for Alternate History and was nominated that same year for the Arthur C. Clarke Award. Also in 1997, BBC Radio 4 had adapted Voyage into a five-part abridged radio play (since then, it has been rebroadcast occasionally, last time in 2009).

Adaptations of the novel: