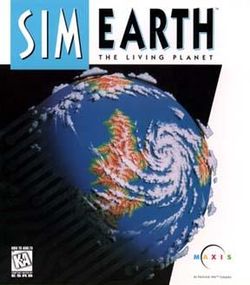 SimEarth: The Living Planet is a Simulation Game by Maxis, released for home computers in 1990 and the Super Nintendo in 1992. The game leaves the player in control of a planet's terrain and biosphere over billions of years. As well as playing with a custom planet, you can try your hand at scenarios like terraforming Mars, solving modern-day Earth's problems, or exploring James Lovelock's Daisyworld

The game is more involved and less humorous than most of the Sim titles. One of its more whimsical elements is the Gaia window, which conveys your ecosphere's "mood" via a talking planet with an animated face.