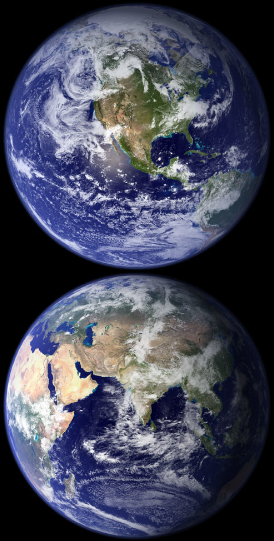 The Earth (also known as Terra, Tellus, Gaia, or countless other namesnote For obvious reasons, every language has a name for this planet. The International Astronomical Union recognizes “Earth” as its English name, but the Latin and Greek alternatives are quite popular in English-language science fiction.) is the planet we all live on. It is the most Conveniently Close Planet. It is the only planet TV Tropes exists on. All tropers were born and live on Earth, unless we have someone currently on the International Space Station. There are over eight billion humans living on Earth. To learn more about Earth, all you have to do is go outside, but we don't blame you if you don't want to.

Earth is really weird when compared to the other planets. The first and most obvious difference is it is the only known place life exists. It is the most tectonically activenote having volcanoes and earthquakes, etc planet in the Solar System (Io is more active, but it's a moon of Jupiter). It has the largest moon in comparison to its parent body's size in the solar system. Earth is the only planet with vast oceans of liquid water on the surface.

The human race evolved on Earth OR arrived there at some point in the past OR was placed here by The Powers That Be. It took us a while to realize that we were on a planet, and not the center of the universe. It took us a bit to realize it was round, not flat (but not as long as Bugs Bunny would have you believe), that it spun around on its own, and that it went around the Sun — not the other way around.

The Earth is the standard we use to measure the universe with. The atmospheric pressure and gravity are considered "1" when compared to other planets, which are either higher or lower than that number. We call dirt "earth", even when talking about the dirt on other planets.note Then again, the common noun "earth" predates the proper name "Earth" in English as well as various other languages; most cultures simply knew Earth as "the world" or some similar term — again, because it took us a long time to realize it's just as much of a planet (i.e. moving object) as Venus, Mars, and other long-recognized planets in our sky. Our moon is called simply the "Moon"note occasionally "Luna", which is Latin for "Moon", since we named it before learning of any others. We measure the distances around the solar system in "Astronomical Units" (AU) — the distance from the Sun to the Earth. We measure distances outside the solar system in either light-years, the distance light travels in the time it takes Earth to orbit the Sun once, or parsecsnote about 3.26 light-years, the distance where the parallax angle measured from opposite sides of Earth's orbit is one arc-second.

With alien life undiscovered, scientists needn't agree on a name for Earth's living things, but we have contenders. The two most popular are probably "Earthling", which dates back to Early Modern English, and "Terran", which comes from the planet's Latin name "Terra".

For the "Mostly Harmless" version of this article, see JustForFun: Earth.

The Earth in Fiction

All fiction is set on Earth unless otherwise specified — because of this a list of fiction set on Earth would be incredibly unwieldy and encompass probably 95% of works. This is because Most Writers Are Human and they write what they know. Fiction set off Earth is usually called Fantasy or Science Fiction, unless it's not. We also have tropes specifically about Earth itself, all listed on This Index Earth, and Planetary Tropes also includes several tropes that either can apply to Earth or involve comparison between it and another (often fictional) planet.