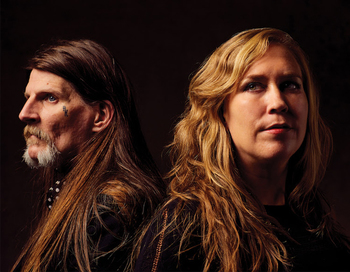 Earth are a musical group based in Olympia, Washington, formed in 1989 by Face of the Band and only constant member Dylan Carlson. They got signed by Sub Pop and released their debut EP, Extra-Capsular Extraction, in 1991. Far removed by the then emerging Grunge and Alternative Rock scenes, is was a good 32 minutes of minimalist riffs being played as slow as possible. It wound up being the Trope Maker for Drone Metal, a subgenre of Doom Metal.

Their first full-length, Earth 2: Special Low Frequency Version, took that Up to Eleven. Drums are removed from the equation entirely, guitars are layered on top of one another, there's only three tracks over the course of its 73 minute runtime, and the final track, "Like Gold and Faceted", is a good 30 minutes of the same chord stretched out to an ungodly length. If Extra-Capsular Extraction was the Trope Maker for Drone Metal, than Earth 2 was the Trope Codifier.

Carlson would tone the formula down for Phase 3: Thrones and Dominions and the live album Sunn Amps and Smashed Guitars, before completely swerving into Stoner Rock for Pentastar: In the Style of Demons, albeit still minimalistic with the drones returning for the tracks "Crooked Axis for String Quartet" and "Sonar and Depth Change". Heck, Tallahasse even got a music video!

Dylan put Earth on hiatus afterwards, citing his heroin addiction, connection to Kurt Cobain's death, and brief incarceration as reasons. He then got the project starting again in 2000, now with Adrienne Davies on drums. Davies would go on to become the second consistent member of Earth, not having left since her arrival. They have also expanded their sound to include Country, Folk Music, and Jazz influences, and are now best described as Post-Rock. The Bee's Made Honey in the Lion's Skull is considered a classic of the genre.

Dylan Carlson was notably friends with Kurt Cobain. Cobain claims to have written "In Bloom" about him, and it's believed that Carlson owned the shotgun Cobain killed himself with. Also worth mentioning in their influence on Sunn O))). They started of as an Earth cover band, and named themselves after the amp Dylan used.