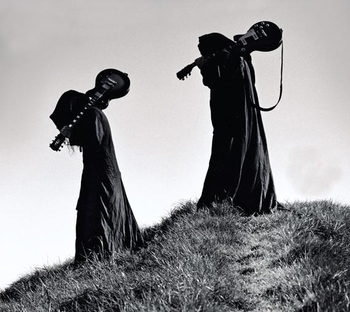 Sunn O))) (pronounced "sun") is an American experimental band formed in 1998 as a tribute to the Drone Metal band Earth, known to many for being Nightmare Fuel in band form.

The band has two core members, Stephen O'Malley (also a member of Sludge Metal bands Khanate and Burning Witch, two bands that are near-equal to Sunn O))) in terms of nightmarishness) and Greg Anderson (of Stoner Metal band Goatsnake). The band is named after the Sunn amplifier brand

◊ is near-identical to the Sunn amplifier logo.

Their genre is known as "drone doom", a subgenre of Doom Metal that fuses the genre with ambient, drone and minimalist music, akin to Brian Eno. Their songs are extremely long, slow, and heavy, and use droning guitars accompanied by feedback and other sound effects to create their soundscapes. There is very little drumming (and a lack of any discernible beat, in fact), although their collaborative album with Japanese band Boris features drumming from the band's drummer Atsuo. When performing live, the band members wear "grim robes", fill the air with fog, and play at an extremely high volume.note We mean it. Bring earplugs. It doesn't matter how much your friends insult you for it; at least you'll be able to hear your friends.

Basically, they're one of the strangest bands ever. And you should never listen to them while stoned.
Advertisement:

TRO)))PES that apply to this band: