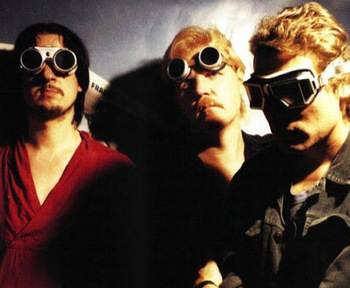 Tangerine Dream is the name of a German Electronic Music act founded in 1967 by the late Edgar Froese. Over the years, they have undergone numerous lineup changes, with Froese as the only continuous member up until his death in 2015. Among its former members are Christopher Franke, who later went on to compose the soundtrack to Babylon 5, and Klaus Schulze, who left the band in 1972 to pursue a solo career and has since become a prolific and influential artist in his own right. Although the band has released innumerable albums over the course of its long history, they are best known for their film soundtracks as well as collaborating with Oh No

Some of their albums:

Some of their film soundtracks: