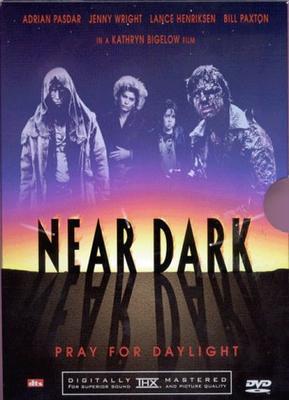 "I ain't a person anymore. I don't know what I am."
—Caleb Colton
Advertisement:

Near Dark is a 1987 horror movie, directed by Kathryn Bigelow, and written by Bigelow and Eric Red. It stars Adrian Pasdar, Lance Henriksen, Bill Paxton, Jenette Goldstein and Jenny Wright. Along with The Lost Boys, it is credited for pretty much reinventing the vampire genre.

Bigelow had originally wanted to make a Western, but realized that interest in the genre at the time was almost non-existent. When then-future-husband James Cameron suggested that she "mix it up with something else", she decided to make a Horror Western.

It tells the story of Caleb Colton, a young Oklahoman, who joins and is subsequently rescued from a family of vampires. It mixes both a certain amount of gory action - Kathryn Bigelow doesn't do slow paced - with a character study of Caleb becoming a vampire and the choices he is required to make. These are not nice vampires as found in Twilight, nor the demons of Buffy, but each is distinctive. Severen is truly scary, Homer is unhappy, while Mae beautifully describes the attraction of living forever. Should be required viewing for anyone playing Vampire: The Masquerade.