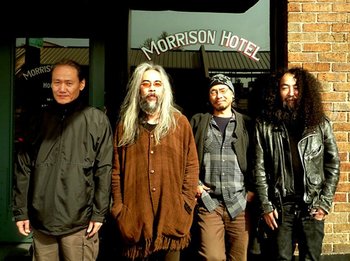 While they do switch up their sound occasionally, they're known for their long, noisy space rock jams with an extreme penchant for Epic Rocking (Some songs approach an hour) and referencing their influnces in the album or song titles. They have also done Lighter and Softer (though by no means shorter) folksy songs, and explored minimalism for their cover of Terry Riley's In C and the several related pieces on the same album.

They never got any mainstream success, but they have a large cult following and are frequently cited as one of the most unique bands of their time, getting mentioned in the same breath as several other Space Rock bands. Fans of Gong and Amon Düül II will find something to enjoy here.