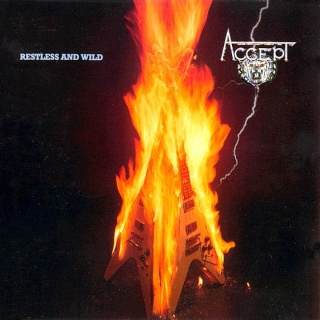 Influences:
Fast as a shark he'll cut out of the dark
He's a killer — he'll rip out your heart
On a one way track and you're not coming back
'cause the killer's on the attack!
— "Fast as a Shark"
Advertisement:
If Judas Priest and AC/DC had a baby, we would just have to Accept it.﻿
— Michael Casale, commenting on

"Balls to the Wall"

Accept is a German Heavy Metal band. Initially started as Band X in 1968, Accept is one of the oldest and most influential German metal bands. Accept no substitutes!

They were successful in the mid '80s until the creative differences and failed attempt at mainstream with their album Eat the Heat broke the band in the late '80s. They reformed in the early '90s with a Darker and Edgier sound but after a couple of years broke up again. Proper reformation didn't happen until 2009.

Despite never achieving the same level of popularity as some of their contemporaries (namely Judas Priest, Iron Maiden and Scorpions), the influence that Accept had on a number of genres such as thrash, speed and power metal (thanks to such hits as "Fast as a Shark" and "Balls to the Wall") has secured their place as one of the most important bands in heavy metal music. As such, they have influenced a plethora of hard rock and heavy metal acts like Guns N' Roses, Mötley Crüe, Metallica, Megadeth, Slayer, Anthrax, Exodus, Testament, Overkill, Helloween, Metal Church, Pantera, Skid Row, Soundgarden, Alice in Chains, Celtic Frost, Kreator, Sodom, Destruction, Blind Guardian, Iced Earth, Grave Digger, Doro and Gamma Ray.