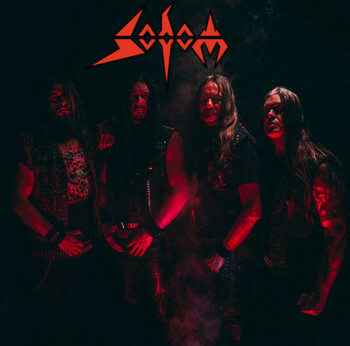 Brandishing the Sceptre since 1981.
Something fierce, something evil, circles in the air...
—Sodom, "Persecution Mania"
Advertisement:

Sodom are a German Thrash Metal band formed in 1981 by bassist and lead vocalist Tom Angelripper who, along with Kreator, Destruction, and Tankard, would become the Trope Makers of the so-called "Teutonic thrash metal" sound and scene.

Tom was originally joined by drummer Rainer "Bloody Monster" Focke, Arius "Blasphemer", and Aggressor, and formed the band partly as a way to get out of working in the coal mines of his hometown. In the early days, their music was essentially a faster and more aggressive echo of their key influences, Motörhead and Venom, comprising one of the earliest and heaviest examples of thrash metal from its brew of Speed Metal and first-wave Black Metal.

Although they managed to land a deal with Steamhammer Records and record two releases, the In the Sign of Evil EP and Obsessed By Cruelty, they still didn't see much success outside of the underground and were written off by critics for their rather unimaginative Satanic image and lyrics despite their promising sound. It wasn't until guitarist Frank "Blackfire" Gosdzik joined in 1987 and convinced Tom to do something different by exploring the political, societal, and war themes he was interested in instead that the band really took off.

With the release of Persecution Mania, Sodom became what they quintessentially would be and still are; a furious blackened, deathly take on extreme Thrash Metal with much of their imagery and lyrics based around the horrible, gruesome realities of war, and their influence still pervades the world of extreme metal today.