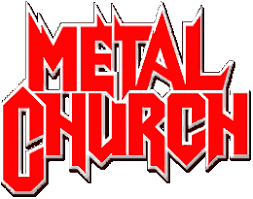 In the blood since 1980.
Metal church, unholy, who'll be the sacrifice
Metal church, the only, don't you know the time is right
Metal church will find you, can't run very far
Metal church inside you, knows just who you are
— "Metal Church"
Advertisement:

Metal Church are a power metal band from Seattle, United States. While they started off as a band bordering on Thrash Metal in The '80s, they eventually eased into American Power Metal after a short while. Their lyrics also changed over that period, from scares and nightmares, to social issues.

The band and their music includes examples of: