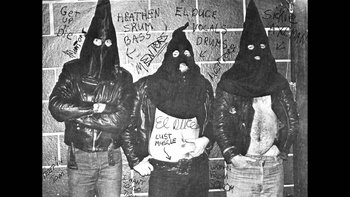 The Mentors are easily among one of the most controversial bands to have graced the face of the earth. Formed by three high school friends in Seattle in May 1976 before moving to Los Angeles shortly after, the band developed a cult following (along with an equal amount of detractors) due to their deliberately sexist and perverse lyrics and song titles (e.g., "On the Rag", "Suck and Fuck and Cook and Clean", and "Four F Club"note  "Find Her, Feel Her, Fuck Her, Forget Her" ), their gimmick of wearing black executioner hoods onstage, and their appearances on talk shows, where the band would deliberately make offensive comments to piss off their audience.

The band made an appearance out of the underground scene in the mid-1990s, when drummer/vocalist El Duce claimed to have been offered $50,000 to kill Kurt Cobain. Not long afterward, he was killed in a drunken accident and the Mentors disbanded. The band reunited in 2001 with El Rapo filling in for the spot of El Duce. As of that time, the original bassist and guitarist are still playing with their new drummer/singer, Mad Dog.