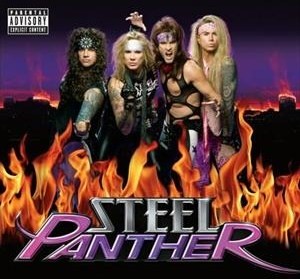 Steel Panther is a Affectionate Parody of Hair Metal, claiming to have failed to gain mainstream success during their formation in 1988. Their look is an obvious throwback to the 80's hair band era, and the music they produce is a spoof of all that was 80's rock music from Def Leppard ballads to Guns N' Roses hard rock. Taken up to 11. Unsurprisingly this leads to tracklists filled to the brim with sex, drugs, self deprecation and Asian hookers.

The group are also notable for their live performances. Frequently calling known celebs on stage to join them and proceeding to mock or try to sleep with them. Live shows often feature cover versions of classic rock songs just for the hell of it too. The persona's of each member carries over into an entertaining live experience filled to the brim with pretend infighting, stories of sexual exploits, overly elaborate solos and of course a healthy slice of Faux Yay. It also doesn't hurt a bit that they're all actually talented musicians.

First gaining success in early 2000, the quartet played in the Sunset Strip, originally under the name "Metal Skool". The bands lineup consists of vocalist Ralph Saenz (Michael Starr), drummer Darren Leader (Stix Zadinia) and guitarist Russ Parrish (Satchel). The bassist was Travis Haley (Lexxi Foxxx) for most of the bands life. Lexxi sat out a tour in 2018 and some dates on subsequent tours, before leaving the band for good in 2021 for undisclosed reasons. Various bassists have filled in for him, but no permanent replacement has been announced.