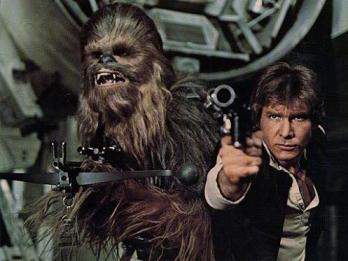 On the right, shown with The Lancer on the left for scale.
"It's not my fault being the biggest and the strongest. I don't even exercise."
— Fezzik, The Princess Bride
Advertisement:

In any decent team, someone's gotta be the powerhouse.

Like the name implies, they're usually the largest and/or the strongest member of the team, in charge of heavy lifting. If someone needs to bust open the door, hold the line against the enemy, break down boulders, or help you move your furniture, they are the one to turn to.

In a fight they're often the one who holds off the army of mooks while the others challenge the Big Bad. While The Leader and The Lancer often fight side-by-side, The Big Guy can be a One-Man Army. Against stronger enemies they might end up suffering The Worf Effect; i.e. getting trounced to set up the villain as an unusually grave threat.

While most are passionate and unflinchingly loyal, what holds them back from leadership among the core team is being Dumb Muscle. They know how to knock heads together but don't do much in the way of strategy. Despite this, as renowned warriors, they may still exercise authority over the supporting troops.

Note: The Big Guy may not necessarily be the strongest on the team (and usually isn't by the end). They just have to be the one who specializes in fighting or physical duties.

Common traits and subdivisions of the Big Guy include:

Powers and skills common to the big guy:

Recently more and more women are filling this role, which used to be a rarity unless the whole team was composed of women. Since physical strength is usually a masculine trait, she may be a tomboy, Lad-ette, or mannish. But you can flip this on its head by making her the Amazon: big, and beautiful.

If she's playing the tough guy straight, her softer side is often a secret cache of girlish habits which she finds embarrassing. On rare occasions, she may be revealed to be a Butch Lesbian, a Tsundere, or even a Violently Protective Girlfriend. When there are Two Girls to a Team, the Big Girl and The Chick commonly form a Tomboy and Girly Girl pair. Most of the time, the Big Girl is the tomboy and the Chick is the girly girl.

Can have some overlap with Scary Black Man, The Strongman and the Proud Warrior Race Guy especially when dealing with dwarves. Due to their status as the biggest, most physically-dangerous person on The Hero's team, they often fall victim to Big Guy Fatality Syndrome. They often form a Brains and Brawn relationship with The Smart Guy in the group, or will be used as a Foil for them a la Brains Versus Brawn.