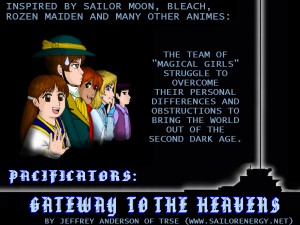 "My dream is to be a Pacificator who helps people, just like my grandmother."
— Daryl Smithson
Advertisement:

The world, due to an unknown disaster, has fallen into a second Dark Age, and only recently have some of the countries begun to climb out of it. However, there are Pacificators, people gifted with rare, "magical" Elemental Powers, who are sent around the known world on peace-keeping missions. Daryl Smithson, an aspiring Pacificator of Light, has enthusiastically taken an offer of joining Commander Bismun Volborth’s unusual platoon of T-Pacificators. Her platoon’s assignment is to investigate an ancient sea oil platform, which is rumored to be the supposed legendary "Gateway to the Heavens," for any technological relics that may either benefit or harm the Pacificators' efforts to end the Second Dark Age.

In addition to this, much of the modern technology as we know it has been lost in the future; there is only a basic form of electricity, and boats and trains are steam-powered, so any technological artifacts discovered would have a huge impact. However, there are evil forces who wish the world to remain in the Second Dark Age, and it’s against those enemies that the Pacificators have to fight for the future of the world.

Daryl’s very first assignment, to her dismay, ran into problems. Two of Daryl’s fellow platoon members never showed up, while the other two — Muneca Powell and Cinna Grossul, Pacificators of Gravity and Fire respectively — were being completely uncooperative with each other. To make matters worse, the Pacificators’ enemies — such as the rogue Renegades with their own elemental powers, and the enigmatic Japanese businesswoman Nozomi — have taken an ominous interest in the Gateway. Will Daryl be able to get one of the worst Pacificator platoons ever assembled to work together in order to complete their mission... or suffer the grave consequences of their failure?

by Jeffery Anderson (the author and artist). He has written the webcomic to pace more like a novel, so it starts off more slowly by building up the premise and introducing us to the characters. The first page can be found here

, and an index can be found here

. So far, there are 70 chapters. J.A. had originally worked with a volume-by-volume focus, although with the 43rd chapter, he has switched to a chapter-by-chapter focus.

A note to potential readers: J.A. is Deaf, and American Sign Language is his first language instead of English. Therefore, there are minor grammar errors in the story, as well as differences in pacing due to how many Deaf people tell stories (for example, pausing to point out things in the background, or explaining things further). J.A. will occasionally put little comments between the panels to explain small things, but they can be ignored or serve as an interesting insight into the storytelling styles of the Deaf. note Why is "Deaf" capitalized? That's how deaf people identify whether they are members of the Deaf community. If they are members, they capitalize the "d" in Deaf. If they're not involved, and don't want to be, they're 'merely' deaf.

J.A.'s other works include: Three Guardians

, in which the sisters and brother Energeia, Akosmia, and Pragma protect the very fibers of the universe from those seeking to control them; Namaka Hamou

, in which some humans have evolved into mermaids, and the star is a deaf mermaid named Gold fleeing from her secret past; the Sailor Moon fan-manga which first put J.A. on the map, The Saga of the Orb of Time

, The Four Horsemen of Apocalypse

, and The Queen of the Kappa.

You can also find him on DeviantArt

Note from J.A. himself: he is fully focused on his geology job, and so sometimes he rushes through the artwork. But since the chapters are sort of a "storyboard," they're not fully finalized. One day, he intends to draw a true final version to his full artistic ability.