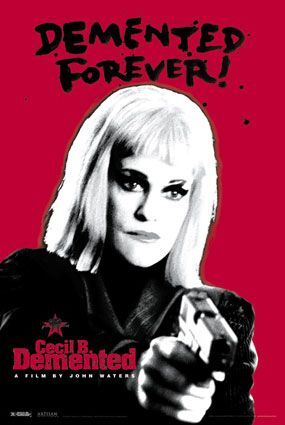 A 2000 Black Comedy film by John Waters, starring Stephen Dorff in the title role as deranged "independent director" Cecil B. Demented, the leader of an equally-deranged group of "filmmakers" who call themselves the Sprocket Holes and base themselves in Baltimore, Maryland. Their mission is to bring down mainstream cinema and destroy the studio system of filmmaking to make way for a new generation of film by any means necessary—which includes robbing theaters and stealing things like construction materials and film equipment in order to make their own film.

The crazed group just has one minor problem: their film doesn't have a star yet, so they "acquire" one in Hollywood actress Honey Whitlock (Melanie Griffith), kidnapping her at the premiere of her latest film. Honey continually tries to stop Demented and his comrades-in-celluloid from making their film and secure her release, but when those close to her begin exposing some nasty things about her private life, she starts to turn to their side and get in on the (lights, camera and) action of Demented's insane film making. Hilarity Ensues