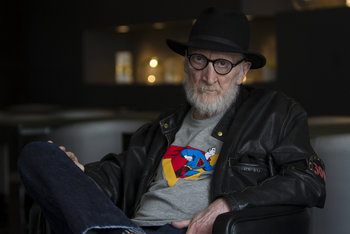 The Man Who "gave Batman his balls back"...and then some.
"With bloody hands, I say good-bye."
— Frank Miller, when asked to imitate Hemingway
Can you imagine Batman cackling and blowing up a bunch of cop cars while Robin weeps in the passenger seat? Well, it happened in a book penned by Frank Miller, which just made about half of you nod knowingly.
— Cracked, The Six Most Insane Batman Scenes Ever Written

, on All Star Batman and Robin
Advertisement:

Frank Miller (born January 27, 1957) is a comic book writer and artist, most famous for helping to popularize Batman's return to his dark and gritty roots. He specializes in gritty, over-the-top noir, and usually draws in an immediately recognizable style - replete with stark black-and-whites and often no color at all. Most of his work is narrated in first-person, usually by a macho Sociopathic Hero. Pretty much all of his work is incredibly violent and bloody, sometimes to the point of Refuge in Audacity. Could be described as the "Patron Saint of Badass." His heroes will be brutalized to the point of Heroic BSoD, but they will also ultimately prove that a single Righteous Badass is superior (or at least equal) to any number of evil mooks.

Miller has been the center of controversy and the hatred of a very vocal sector of the Internet population, mostly due to his perceived over-representation of prostitutes, sadistic violence (seen as violence for the sake of it), and his conservative and hawkish political views, although many people alternatively like his works for exactly those reasons. Hence the fan conflicts. For instance, many people think his portrayal of prostitutes and female heroes implies a form of misogyny; however, fans will point out that not only are these prostitutes portrayed as sympathetic and strongly independent characters (except when they die), but that two of Frank's most famous creations are Elektra and Martha Washington. Others will point out that many think Elektra's best writing came after Miller, that Martha Washington ended up tangled up in Miller's personal views and that Miller tends to fall back on the same tropes when it comes to writing women. As you can see, it is not an easy topic.

He has won multiple Eisner, Kirby and Harvey Awards, as well as a nomination for the Palme d'Or at the Cannes Film Festival for Sin City.

Frank Miller has worked on the following comics, amongst others:

Frank Miller is also known for writing RoboCop 2 and RoboCop 3 (though is at pains to point out both suffered from extensive Executive Meddling). He also co-directed and wrote the film adaptation of Sin City. And he's directed a movie adaptation of The Spirit, which it may or may not have turned out well, depending on who you ask and whether or not they're fans of the Spirit's comics and Frank (the comics are actually very over-the-top like the movie, though Frank did add some of his signature grittiness). Miller and Tom Wheeler co-wrote the young adult novel Cursed, which was turned into a Netflix series of the same name.

He's recently indicated he'd like to go against type and tackle Captain America, exploring Cap's idealism contrasted with the dark post-9/11 world. Considering how his previous major use of the character (Daredevil: Born Again, ironically enough) had Miller write some of Cap's most memorable moments (and lines, such as the immortal "I'm loyal to nothing, General... except the Dream.")... that might not be too bad of an idea.

Not to be confused with fellow comic book author Mark Millar, or with the crook that tries to kill Will Kane in High Noon (incidentally one of Miller's favourite films).